To pass the time while we’re snowed in, I’ve put together an XI that I would like to see using existing players. I’ve also marked up the areas that can (realistically, over a couple of transfer windows) be addressed. Tellingly, my feeling is that we only have five players (it would make a decent 5-a-side team, mind) that nailed on for the starting line-up. Thoughts..?

GK. Leno – enough positive early signs to gloss over a few struggles recently. Also, factor in that it’s an area of the squad that we’ve recently spent money on that could be better used elsewhere. Is Emi Martinez up to the standard to be a No.2 that’s going to push Leno next season though?

DF. Jenkinson – Probably the longest explanation required… Obviously, we all wish Hector a speedy recovery from the season-ending ACL injury. How do we fill the gap? Licht-shizer? Maitland-Niles shunted out of position, again?

With my business hat on, we need to cash in on our saleable assets in the summer. To me, Hector is our most saleable asset (Transfermarkt says £36m – Spanish clubs would lap it up) that wouldn’t have a detrimental effect on the team. While he recuperates, Jenko could well play himself into the side as the attacking full-back that we deploy. With a concerted period of Emery coaching drills (and some patience from the fans), I don’t think there’s anything Bellerin can do that Jenko can’t. The Englishman has positional sense (Bellerin has five assists this season, but how many goals against could he have prevented?), is almost as fast in a foot race, plus his height would be an added bonus at the back.

DF. Kolasinac – an upgrade on Monreal but an area we can upgrade in again. Ideally, I would like to see our defenders be… defenders, first and foremost, but whether that’ll be the case under Emery, I’m not so sure.

DF. Holding/Mavropanos – in time, it would be great to see Holding continue to show the steep progress he made before his injury and nail down a regular spot in the side. From his brief appearances last season and from what we’ve heard of Mavropanos, it seems as if he’s got a chance of getting himself in the mix as well – that remains to be seen with more game time. These two promising young centre backs are encouraging for club and fans alike.

Possible alternatives? In the short-term = a fit Koscielny, long-term = linked with Gianluca Mancini @ Atalanta but Jose Gimenez or Varane are the money no object/next level targets.

DF. Sokratis – made an impression in his first season. Leading candidate for the captain’s armband next season.

MF. Maitland-Niles – so much potential. He and every fan can’t wait to see a run in his natural position.

MF. Torreira – top numbers in all sorts of stats tables but more importantly his energy, passion and tactical nous are a pleasure to watch after years of midfield void. Build the team around this guy.

MF. Guendouzi – Emery majorly lucked out with MG’s breakthrough first season. We’ve asked way too much of a 19-year-old from Ligue 2 but he has definitely swum not sunk. Probably the biggest success of Diamond Eye Mislintat’s brief tenure.

Possible alternatives? Blaise Matuidi would be the perfect fit in this set-up.

ST. Reiss Nelson – I’m really looking forward to the 18-year-old’s return from Hoffenheim (can we swap him for Alex Iwobi next season?). With six goals in 13 games in the Bundesliga (it was six in seven at one stage) and Champions League experience under his belt, it would be great to think that Emery will take a punt on the young Englishman. Similarly, Emile Smith Rowe can hopefully improve his stock with some game time in Germany.

Possible alternatives? Denis Suarez – (depending on how his loan goes) but ‘on paper’ why pay £20m+ for a player that has Iwobi-esque stats rather than putting faith in an academy prospect who’s doing the business and has a point to prove when returning from Germany? 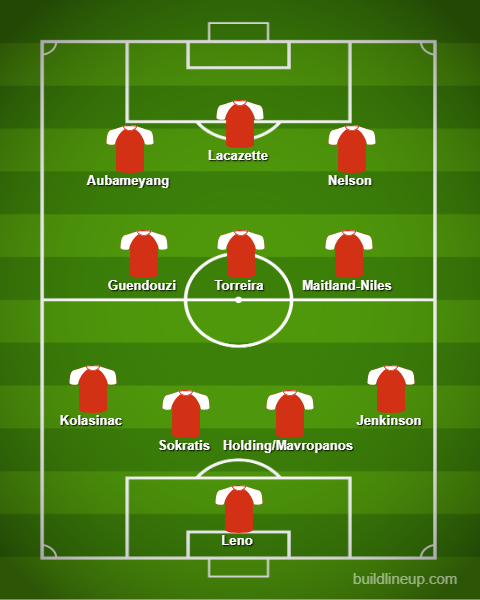