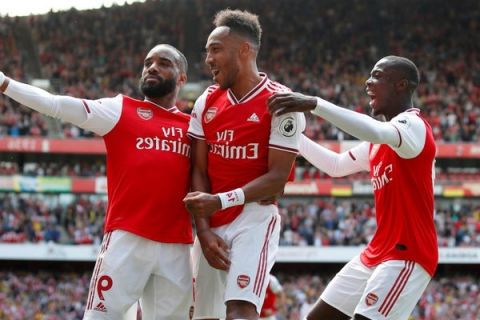 The feelgood factor is catching up on even the Arsenal players. by Lagos Gooner

Before the arrival of Arteta, there were insinuations that a lot of the senior Arsenal players were not happy with the way things were going in the club. Some were rumored to have stopped all contract negotiations; others were thought to just play for the club sorely because they had a contract to fulfill and not because they wanted to still play for the club.

Our two strikers were said to be negotiating new contracts with the club earlier in the season; the negotiations were taking so long. All of a sudden, we started hearing stories of how Aubameyang’s contract was withdrawn because the Gabonese had made up his mind to leave the club. The gist was that Auba felt he needed a new challenge and was not keen to remain in the club beyond his contract; a story Auba would later deny.

“I would like to react to some of the rumours that are going around about me in the media,” said Aubameyang, in the matchday programme for Monday’s FA Cup showdown with Leeds.

“People like making up stories and they should focus on what’s happening on the pitch. They talk too much and it does my head in!

“I am the Arsenal captain. I love this club. I am committed to it and desperate to bring it back to the top, where it belongs.”

Now, this is not just something he would have said if he didn’t mean it. In the same matchday programme, Aubameyang also spoke about the feelgood factor in the club…

“I really hope that you were proud of us after the United game. I’m sure you can see what we’re trying to do on the pitch that you can see improvement in our performances and now it has materialized with a deserved win on Wednesday.

“The atmosphere was exceptional. When you are on the pitch and you feel the crowd roaring after every run, every tackle, and every duel and after every chance, it gives you such a boost mentally. The Emirates felt like a fortress.

“You were our 12th man and I felt like Manchester United could have played for hours and they would have never scored.

“I really hope it will be like that until the end of the season. All together, we can have a great 2020! We need to be united more than ever.” He said.

Aubameyang is not the only player talking about the feel good factor currently experienced at the club; a lot of Arsenal players have come out at different times to talk about how improved the mood at Arsenal has become ever since Arteta was employed. This is actually a good thing because with happy players, we expect good results and with good results the sky would be our limit as a club. We are Arsenal and we are proud.