The majority of Football fans in the last couple of weeks have rightly been proud how supporters put tribalism aside to come together and protect the integrity of the Sport.

Owners of the so called ‘Big Six’, including Arsenal’s Stan Kroenke, were forced, in the space of 48 hours, to withdraw from the Super League after public outrage that ranged from fans and ex-players to politicians. 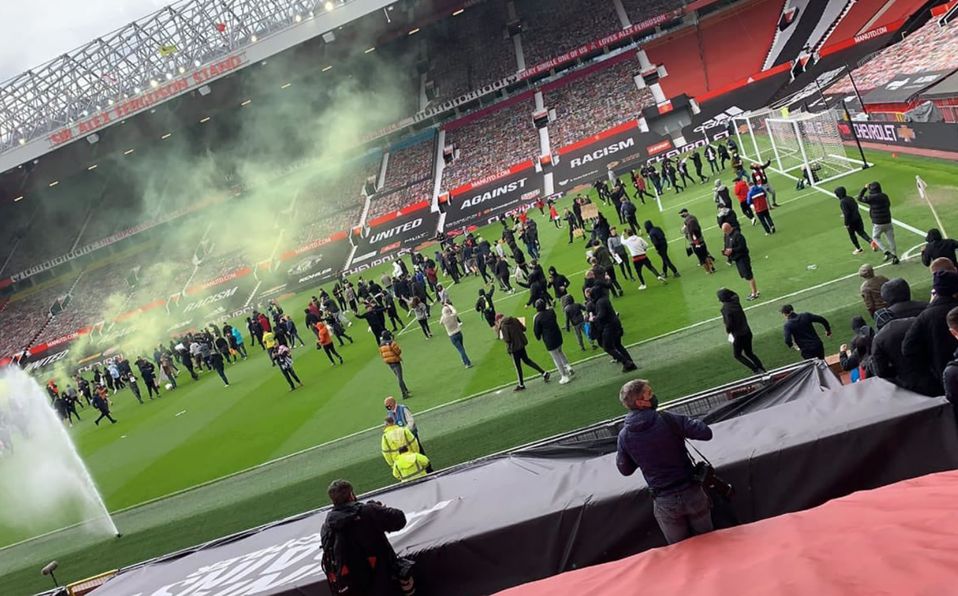 When Leeds and Chelsea fans held protests on the Monday and Tuesday after the breakaway League was confirmed, it had nothing to do with their own agendas.

Yesterday at Old Trafford, the actions of a minority of Man United Fans had nothing to do with the Super League. They were not representing Gooners or any other fanbase in this country.

This was a group of thugs using the SL as an excuse to cause a riot, a reason to spread trouble, giving themselves justification to cause trouble.

Long term readers will know my feelings towards Stan Kroenke, and therefore I can relate to my Red Devil peers who are unhappy about how the Glazers have done business. I maintain that what the 6 owners tried to do was greedy and would have destroyed the Football pyramid in England.

Yet being a stingy Millionaire isn’t against the law. Trespassing a stadium, throwing missiles, breaking equipment, vandalising cars, putting people in hospital, fighting the police, etc …….. is!

Those arrested won’t be able to turn to their lawyer and argue ‘but our owners did …….’. There’s zero legislation that says if you don’t like how your football club is being run that you can act like a criminal.

Shame on Gary Neville and Roy Keane on TV for not educating young viewers, and I will be amazed if Sky Sports don’t make a statement stressing that they as a company don’t condone the scenes in Manchester.

Football is a beautiful game…. but it’s just that ……a game. Grown adults should be able to separate sport from life.

A pundit saying …. ‘the Glazers did ….’  ‘United fans are emotional’……. ‘two weeks ago they tried to destroy our Football’…… is a scary attitude.

We can and have had a conversation about how wrong those owners are, hence, why they have all been grovelling since.

But look closely at the images this weekend. Cameras being smashed, corner flags being stolen, changing rooms being bombarded. What’s that got to do with the Glazers?

Graham Souness had the bravery to point out that bottles and flares were thrown towards the media area (something his peers were not going to mention). What does trying to throw a flare at someone have to do with a Super League which has already been cancelled?

The pundits (conveniently ex Man United players) stressed that ‘you will always get a couple who go too far’, not wanting the headlines to be negative. Sorry? How many fans were on the pitch? How many got access to the dressing room?

Each and every person who entered the venue was breaking the Law. That was more than one or two. Imagine being a steward not prepared for any crowds and how intimidating it must be to have a gang of hoodies, throwing bottles, pushing their way past? There was nothing peaceful about that?

Staff locked themselves into rooms scared of the sudden invasion. No one should have to feel like that at work. Again what’s peaceful about that?

The local police don’t deem it unsafe for the two sides to travel based on a couple of people.

Whatever went on outside the two hotels the squads were based at was serious enough. It’s like those who last year took part in BLM marches as a reason to help themselves to a brand-new TV and sound system. People wanted to act like yobs and just used the SL and Glazers as justification.

They might feel they picked the best fixture to postpone. No game in Britain attracts more Worldwide views than Man United vs Liverpool. How many in Asia or South America will see the link between throwing a flare at someone and the Glazers being unfit owners? I’m not so sure.

They most likely will think ‘what a bunch of hooligans’.

Be honest, when you’re shown crowd trouble from Serie A, how many times have you responded, ‘well let’s hear how bad their owner is before we decide if it’s okay to break the law’.

What’s next? Would it be okay to break into the Glazers’ house?

The worse thing is that; by their actions, the only progress made is perhaps showing why fans having 51 percent ownership isn’t a good idea? Not when some do this, and not when others make excuses for it.

So no Man United …. you didn’t represent the big six.

To clarify, Arsenal and Man United are run by Americans who don’t care about their clubs. That is frustrating for those why have an emotional connection.

Yet we just had a year where people couldn’t visit loved ones in hospital or even attend funerals. People had to deal with that without taking the law into their own hands.

So if people can deal with that, then I’m sure Football fans can handle incompetent owners without breaking the law. Can’t they?