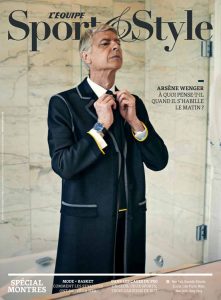 Arsene Wenger is in his last week as manager at Arsenal, and although he is leaving under a bit of a cloud after having his worst season at the club ever, there is no doubt that he earned all the plaudits and respect that he has been given because of what he has brought to Arsenal over the last two decades.

His achievements from his first year through to our move to the Emirates are extremely unlikely ever to be equalled, never mind beaten, and the Boss is very hopeful that his replacement can bring the same qualities to the job that he himself has over his career.

When asked what advice he would like to give to his replacement he said: “”The advice I’d give to him is to give his best and respect the values of the club,” Wenger said. “This club is respected all over the world and I would just like him to bring his own ideas.

“It will be a different speech, a different way to see the game. It’s a chance for the players to see something different. As well, on the other hand, I’d say to respect what has been built here and what people care about as well.

“You have seen on Sunday, when you speak about the goodbye I had with the fans, is that some of the fans don’t always agree with my decisions but I think they respected one thing: that I was honest, loyal and committed to the values of the club and to give my best for the club.

“They wanted to tell me ‘we agree with you on that’. And I would like my successor to do that as well.”

So I think we must all surely agree, that although many of us have been calling for him to step down in the last few years for outstaying his welcome and failing to compete with our rivals, we have to respect his integrity and loyalty to our club from the day he arrived until he leaves next week.