The saga is over, Mesut Ozil has finally left Arsenal football club.

In the end they paid him to leave, a stark contrast to his arrival in 2013 on transfer deadline day when Arsenal fans swarmed Sky Sports news presenters, as they reported on Arsenal smashing their transfer record to sign one of the best playmakers in the world.

He lit up the Emirates in his early days, breaking Premier League records for creativity as he helped deliver Arsenals first trophy in almost a decade, but things have turned sour in recent years.

At the start of 17/18 season, Alexis Sanchez and Ozil were entering the final year of their contracts and it was financially impossible to re-sign both, and the club had a decision to make. Sanchez was far more reliable, but he couldn’t match Ozil’s commercial haul with 83 million followers across his social media platforms.

He proved to be a valuable asset for the club. Ozil got a 3-year extension worth 350,000k a week making him the highest paid player in Arsenal’s history. A massive 250-million-pound kit deal with Adidas and a partnership with “Visit Rwanda” soon followed. This was supposed to be a triumph for Arsenal showing their intention to be among football’s elite clubs.

But soon Ozil’s work rate and commitment was questioned as he often missed games through illness or injury. When Unai Emery came in as manager, his pressing football and 3-5-2 formation didn’t suit Ozil and he was often left out of the team or played on the wing.

That was followed up by current manager Mikel Arteta who didn’t even register him in Arsenal’s Premier League squad this season due to “football reasons”. It was suggested that his refusal to take a pay cut (that most of the rest of the squad agreed to) led to his exile. Some other supporters argued it was punishment for Ozil’s comments on the plight of Uighur Muslims in China, comments that cost him endorsement deals in the country and also Arsenal’s games being taken off Chinese television for some time.

Only people in the inner circle will actually know the truth behind it all, but amid all the criticism and controversy of Ozil it’s very easy to forget just how good he was when he decided to let the magic flow. I’ve decided to focus on all the positives in his career, so here’s a look back at the magic of Mesut Ozil from the streets of Gelsenkirchen to the worlds most creative midfielder.

Ozil started in the youth system of Schalke 04 before making the switch to Werder Bremen for a fee of 5 million. He excelled in the 08/09 season recording 3 goals and 15 assists in the Bundesliga. He helped lead the North German club to the 2009 DFB-Pokal with the winning goal in a 1–0 victory over Bayer Leverkusen in Berlin.

In the 09/10 season the brilliant Brazilian Diego left Werder Bremen to join Juventus and Ozil took over as the clubs main playmaker. He led them to finish 3rd in the Bundesliga and finished with 10 goals and 29 assists in all competitions. He was quickly making a name for himself as the “assist king” as he got as much enjoyment out of providing a goal for a team mate as he did from scoring himself.

Eligible to play for Germany and Turkey, Ozil chose to play for his country of birth. He helped Germany win the U21 European Championship in 2009, producing a man of the match display in the final. The next summer he found himself on the plane to South Africa for the 2010 World Cup. This is where Ozil announced himself on the world stage. At the age of just 22, he showcased his obvious talent to the world. With his laid-back elusive style he picked holes in the opposition and scored an outrageous volley against Ghana. Germany demolished England and Argentina before going down to the eventual winners Spain.

While the tournament ended in disappointment for the Germans, Ozil had caught the eye with his performances, he was named in the top 10 players of the tournament and was nominated for the Golden ball. This led to Jose Mourinho bringing him to the Bernabeau to join Spanish giants Real Madrid.

Ozil would go on to represent Germany for another 8 years playing in four major tournaments, which peaked in 2014 as he helped Germany make history by becoming the first European team to win the World Cup in South America. Özil scored the decisive goal in the 119th minute of Germany’s 2–1 round of 16 victory over Algeria.

He concluded the tournament as the leader in passes completed in the final-third (171), was ranked joint-second in chances created (17), behind only Messi (23), and ranked second overall in possessions won in the final-third (6). German legend Philipp Lahm lauded his playmaker: “Mesut is the most intelligent player I have ever played with he is a dream for strikers.”

In May 2018, Özil retired from international football alongside Ilkay Gundogan, both of Turkish descent, after they were criticised for posing in photographs with the Turkish president Erdogan

It caused tension in Germany and prompted accusations that they lacked loyalty to the nation. Özil also commented on several media outlets that were using the photograph, where he asserted that the media outlets have selectively criticised him for his Turkish background.

He later detailed his core issue with the national team stemmed from his interactions with Reinhard Grindel, the DFB president, accusing him of displaying both racism and disrespect on multiple occasions, while also noting similar incidents with other high-profile German nationals, namely Bernd Holzhauer and Werner Steer. He then retired from the team as a form of protest against members within the Federation in which he perceived had “racially discriminative backgrounds”.

He made 92 appearances for Germany scoring 23 goals over 9 years and was named German player of the year 5 times.

Following his impressive performances at the 2010 World cup he moved to Madrid, Many players struggle with being the next big money Galactico but Ozil was right at home in the capital, always playing with his head up looking to make things happen with his laser vision and perfect weight of pass he was perfect for Ronaldo and Benzema.

He lit up La Liga over three seasons, he was given a standing ovation by the Bernabeau after his first two games and finished the 10/11 season with 25 assists more than any other player in Europe.

Ozil switched to wearing his favourite number 10 shirt at the start of the 11/12 season, signalling Jose Mourinho’s intentions to use him as Madrid’s main playmaker. He helped Los Blanco’s clinch a record 32nd La Liga title by registering 17 assists in the league, as Madrid became the first team to reach 100 points in a season and scoring the most goals in a single season (121), and Ozil set a record for the most chances created in a CL knockout match (12) v Spurs.

At the end of the 12/13 season Mourinho left the club and Carlo Ancelotti came in. Madrid broke the world transfer record to sign Gareth Bale, and funds were low so either Angel Di Maria or Ozil had to make way and it turned out to be the German. He was the highest assister in La Liga three years in a row and provided 27 assists for Cristiano Ronaldo, more than anyone else in that time. Ronaldo described it as a very sad day when Ozil left the club. 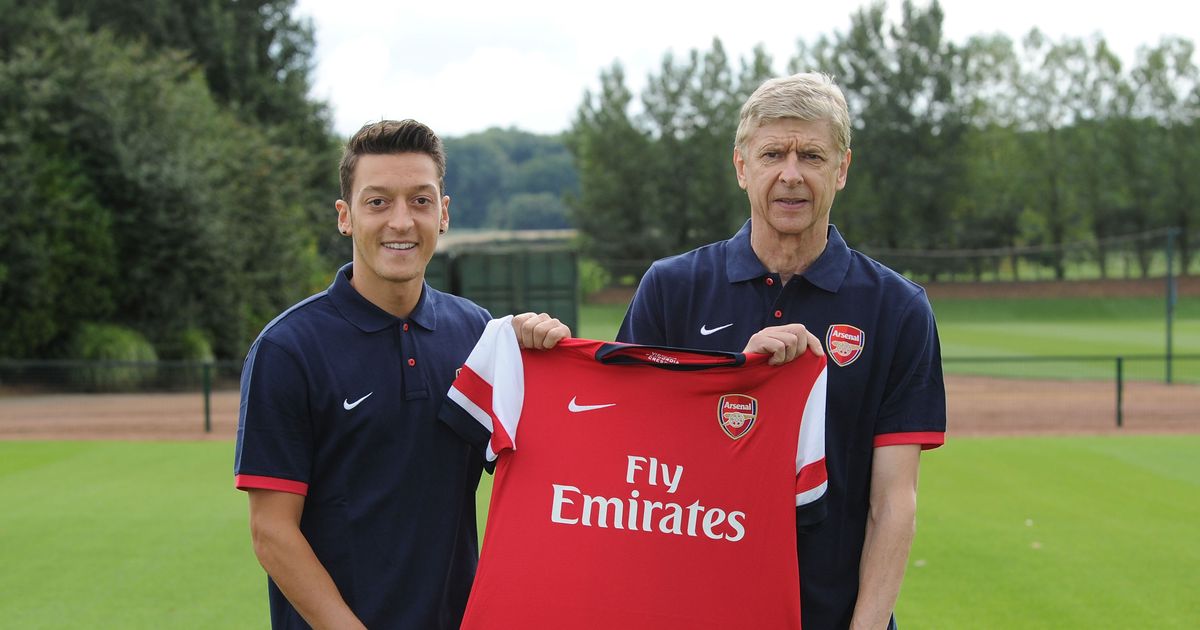 Arsenal were finding it hard to compete with their wealthy rivals while paying off debts from the move to the Emirates stadium and they were getting a reputation of being a selling club. Just as they looked to be building something their star player would move on – Thierry Henry and Cesc Fabregas departed for Barcelona while the most sickening one was Robin Van Persie who left for Manchester United. It was blow after blow for the club until they smashed their transfer record to sign Mesut Ozil.

This was a monumental signing for Arsenal a statement of intent. Arguably the best playmaker in the world with his peak years ahead of him would be coming to North London to wear the red and white. The fans were Euphoric as they swamped Sky Sports reporters and gathered outside the Emirates in their new Ozil 11 shirts. 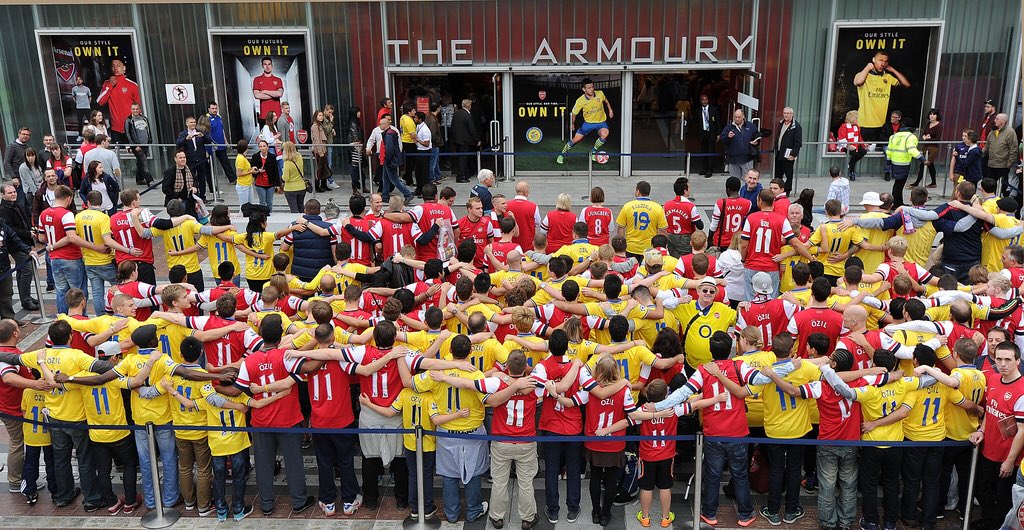 Arsène Wenger said this about his new signing when he arrived: “Özil is an artist who feels football through all the pores of his skin and his soul. Like all artists, he needs to feel supported in his creativity. He has a feel for passing and an exceptional sense of timing. There is something magical about his playing style.”

He undoubtedly had his best days for the club under the Iconic Frenchman. Arsenal hadn’t won a trophy in almost a decade when Ozil arrived but he helped change that by winning consecutive FA Cups in his first two seasons. Arsenal also mounted their only genuine title challenge in 2015/16 as Ozil hit his peak for the club, registering 19 assists in the Premier League only Henry bettered that for Arsenal in the 2002/03 season.

He added another FA Cup in 17/18 although his involvement decreased as the years went on. Things may have got complicated between him and the club, he has been one of the most exciting players to play for the Gunners. He got fans off their seats with moments of class, sumptuous touches and magical flicks that Arsenal fans will never forget.

His first goal for the club was a taste for things to come, the way he cut across the ball to control this finish. Effortless!

And this audacious flick assist over the top for Giroud that most players would only dream about..

This free-kick had no right to go in on the Goalkeepers side..

He became famous for a unique bounce technique for passing and finishing which is quite simply outrageous..

He spent 7 years at Arsenal playing 259 matches scoring 44 goals and registering 77 assists, winning 4 FA Cups. Whether he will go down as a club legend is irrelevant to the fact that he is one of the best creative midfield players the Premier League has ever seen.

They say in football that the first five yards are in your head. Ozil is a unique player; while sometimes he might look like he is in second gear he was always a step ahead of every other player in his mind. He sees motorways where other players see footpaths. The thrill of the assist is what made him tick. He wasn’t called the Assist King for nothing. He is the only player in football history who has been the top assist provider in 3 of the top 5 European leagues. (Bundesliga, Premier League and La Liga.) He is also the only player in history to do so in a World Cup and Euros.

His top 10 goals aren’t too shabby. The Cruyff turn back onto his right foot. The way he cut across the ball against Napoli. A rocket to the roof of the net in the Allianz Arena. A thunderous strike in off the bar for his country. His silky feet and dribbling in the early days at Werder Bremen. A free-kick for Madrid. A half volley at the world cup. A volley out of the sky in the emirates, and that delicious goal in the Champions League that went viral.

Ozil is a divisive figure worshipped by some and hated by others but one thing we can all agree on is that there is no doubting his natural talent on the football field, and few players could match his seemingly effortless brilliance.

This tribute to Mesut Ozil is a Guest Article that was written by the Sports Journalist Cian Johnson and he posted it to his personal GAA and football blog, attackingfootball.com.