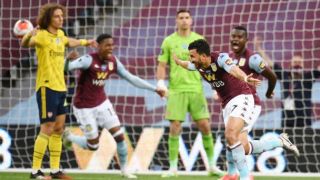 Losing to Villa not the end of the world! by Shenel

Tuesday evening’s game against Aston Villa hardly brought about a surprising result did it? Especially given the past two energy-fuelled performances the boys put in against Liverpool and Manchester City in the space of three days and the small fact that Villa needed it more than we did.

But saying that, players with that stamina and the pay checks they get, should be able to perform for ninety plus minutes in every single match, no matter the amount of rest they get. At the end of the day they are getting paid to run around for that period of time and to try to win games – doing what they love every three or four days. I know if it was me, I would always put in a ONE HUNDRED AND FIFTY percent shift in each and every game. I know it doesn’t always work out but showing you want it and then showing you’re not really trying does a lot to your mental strength and ability.

Well let’s be honest too, we knew we would struggle to get in to the top four and even the top seven this season, what with our inconsistent performances, many draws and the fact that teams above us were grinding out results when we couldn’t.

But I think it’s fair to say that despite dominating possession against Villa and knowing that our actual chance of playing European football next year lies in our hands, with our fate coming in the FA Cup final and despite the changes Mikel had made for the Villa game, our boys can be forgiven.

Beating two of the biggest and best teams in the world rather impressively over the space of three days is something we can be proud of, and yes losing to Villa has brought us crashing back down to earth but we can’t go giving give all our new secrets and tactics away this season now can we!?

It’s never nice to lose but if we must, then let us lose now and recharge our batteries after Watford and get ready to seek revenge over Chelsea after the Europa league defeat, and claim our record 14th FA Cup trophy and bring it back home where it belongs! Gooners?