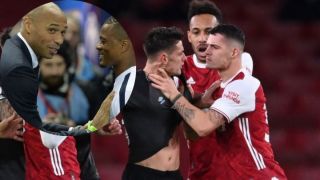 The former striker currently holds the record for most Arsenal goals, and the club remains in his heart after eight years with the club.

Our former captain is claimed to have refused to watch his beloved team previously however, after seeing current midfielder Xhaka coming out as captain.

Fellow Frenchman and former Premier League star Patrice Evra claims he was at Henry’s house one evening, and about to watch the game when Thierry turned the television off.

The former United defender was telling the story shortly after seeing the Gunners lose, possibly down to the Swiss international’s red card.

Evra told Sky Sports after the match (via TalkSport): “Thierry Henry, one day he invited me to his house to watch Arsenal.

“He turned on the TV, the first image he saw on the screen was Xhaka leading Arsenal.

“Thierry Henry turned off the TV. He said ‘I can’t watch my team and Xhaka being the captain’.

“He’d tell you everything about what the legends of this club think about him. He again let down his team.

“We criticised [Nicolas] Pepe so much but Xhaka, it’s not the first time.”

Xhaka most definitely let the side down this weekend, as we was pressing on in search of the opening goal before his dismissal, and with the team having worked so hard to try and overcome their terrible form in recent weeks, this was a huge setback for our side.