Thierry Henry stands down from Montreal job to return to London

The Arsenal legend Thierry Henry has stepped down as the coach of Montreal in the MLS after 18 months in Canada. As he explained in Tweet on his official Twitter account, the Frenchman has explained that he just wants to return to London to spend more time with his wife and children and feels that he has missed out on a lot of their childhood due to the Covid Pandemic restricting travel. 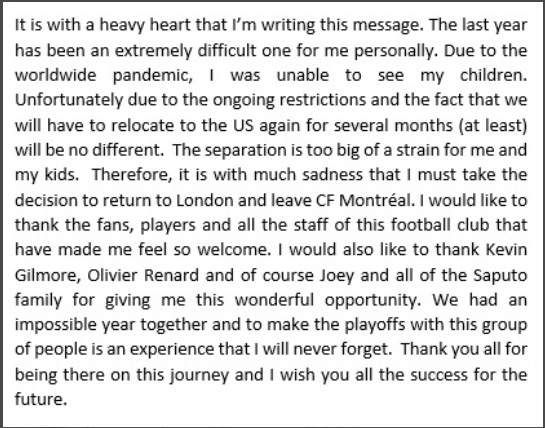 Just about every Arsenal fan is hoping that our greatest ever striker will come back to the Emirates as a manager one day, and after failing miserably at Monaco, where he was in charge of 20 games but only managed to get four wins in his short time in Ligue 1, it was hoped that some success with Montreal would get his managerial career back on track.

He didn’t fare too badly over the water though and took the club to the MLS play-offs last season, but halfway through the current campaign sees his team languishing in ninth spot in the table, 21 points adrift of the Philadelphia Union.

Thierry will now hopefully get a chance to manage a club closer to home, and our dream of seeing him return to Arsenal is still a possibility….

READ MORE:  William Saliba makes a clanger while on loan at Nice.