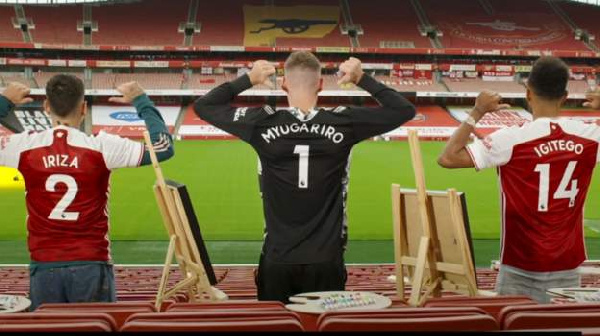 Gorilla naming ceremony for our three first-team stars! by Shenel

Forward on two years and as part of their ongoing historical gorilla naming ceremony known as Kwita Izina, three of our current crop – Pierre-Emerick Aubameyang, Hector Bellerin and Bernd Leno- have joined a list of Arsenal legends, in naming three endangered mountain gorillas.

The ceremony is now in its 16th year and always manages to attract global attention. It highlights the importance of gorilla conservation. Previously this occasion has attracted the likes of Sir David Attenborough, model Naomi Campbell and actress Natalie Portman, but most importantly our three current stars join the list alongside Ex Arsenal legends Tony Adams and Lauren and Arsenal women’s star Alex Scott.

24 baby gorillas that are homed in Rwanda’s Volcanoes National Park will be named this year in a celebration of “nature and the conservation front liners who protect and care for them every day.”

As mentioned on the Arsenal website: “The ceremony features stories from the field on how rangers, vets and researchers work every day to protect gorillas and how Rwanda’s Tourism Revenue Share Programme, in which 10 per cent of tourism park revenues are invested back into communities, contributes to the development of communities living adjacent to Rwanda’s national parks.”

The names given to the three gorillas by our stars are below:

Pierre-Emerick Aubameyang named a baby gorilla Igitego, which means ‘Goal’. Igitego is the son of Pasika from the Mafunzo family and was born on July 5, 2019 . Which I think is rather fitting given that he is prone to scoring many goals!

Hector Bellerin named a baby gorilla Iriza, which means ‘First Born’. Iriza is the daughter of Igihembo from the Kwitonda family and was born on October 11, 2019.

Bernd Leno named a baby gorilla Myugariro, which means ‘Defender’. Myugariro is the baby of Kubaha from the Amahoro family and was born on September 28, 2019.

Again this can be seen as fitting as Leno is someone that has to defend our goal at all times.

It is always nice to see our players helping our sponsors and other charities outside of the pitch and to be involved in something so special that helps with nature and wildlife also shows the many different sides a footballer can have and takes away many stereotypes that may be around.

Here’s hoping the gorillas that have been named grow up to be strong, talented beings just like the people who have named them. Gooners?