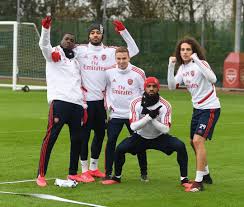 Three-year contract turned down and exit confirmed by Arsenal youngster

Arsenal youngster Nathan Tormey has announced on Twitter that he is quitting the club this summer, despite a three-year contract on the table.

The 20 year-old is yet to get a call-up to the senior Arsenal sqaud for a single matchday squad, and he looks to have ended all hopes of ever getting his chance, revealing he is turning down the offer to stay.

The winger scored four goals in his 15 PL2 outings for the development side this term, but will now be on the lookout for a new club.

Tormey’s current deal will expire in the coming days, and it remains to be seen where he will be plying his trade next season, but he is no stranger to making moves despite his young age, previously having been on rivals Tottenham Hotspur’s books also.

I appreciate the offer of a new 3 year contract but I feel now is the time for me to move on. I would like to thank all the people at the club who have helped me become the player I am today and wish them all the best for the future. I am looking forward to a new challenge

While it isn’t completely outrageous to consider that a 20 year-old would turn down a three-year contract with a team of Arsenal’s stature, I can’t help but feel that doing so would be an unlikely scenario unless a new club had been found.

Unfortunately for Tormey, he doesn’t appear to have teams lining up to sign him, although this tweet may well attract some interest, and I feel that was exactly the purpose behind it.

I could be wrong, and Nathan could well have turned down our offer as he seeks first-team football instead, but that could prove to be a risky move if he wasn’t assured of a contract elsewhere.

Would Arsenal bother to comment if they refuted the player’s claim? Am I wrong to judge the youngster’s credibility?