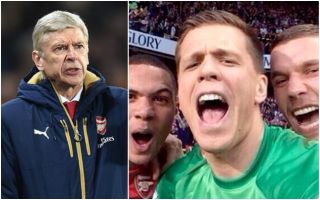 Top 10 Things We Learned In Isolation With Wojciech Szczesny

Arsenal’s official website run a weekly podcast called ‘Lockdown‘. This week they interviewed our former keeper Szczesny, who is now at Juventus.

The Pole moved to Arsenal at the age of 15, cementing himself as our first choice in 2011. After a couple of mistakes cost us a defeat at Southampton he was dropped when caught smoking in the showers. Despite impressing on loan at Roma, the signing of Cech convinced Arsene Wenger to sell him to Juventus where he’s been trusted to replace Buffon.

Here are 10 things we learned in isolation with Wojciech Szczesny…….

He Worked With David Seaman
Arsene Wenger often got a hard time for taking too long to trust his ex-players to come back and help behind the scenes, so it’s refreshing to hear that’s exactly what David Seaman did. As part of his coaching badges (he stopped when realising he also would have to coach other positions to get the badge) our ex number one worked 1-on-1 with the keepers. Szczesny talks about struggling mentally when he broke a bone in both arms and credits the Arsenal legend for being a massive part in supporting him.

He Liked a Prank
You know you have a reputation as a joker when the interviewer mentions a Prank with a car, and you can’t recall which story he’s referring to as there is more than one. He would wind Jack Wilshire up by driving his vehicle out of training, so his teammate didn’t know where his ‘ missing ‘ car had gone. Yet he seems most proud of how long it takes to wrap a car up in cling film. One he regrets is taking a selfie at White Hart Lane. He didn’t get in trouble, but his boss asked, ‘Is that what Cassillas would do?’

He Knew He Was Better
He’s professional throughout and respects the rule of supporting your fellow members of the goalkeeper’s union. Yet you feel he want to say numerous times what we all thought at the time, ‘how can you possibly think Almunia or Fabianski are better?’ This isn’t a sportsman just having the self-belief you need, he simply knew he was better. He was waiting for that one opportunity admitting he was delighted when both were injured for the trip to Old Trafford.

Smoking Incident
It seems this was not as juicy as the media made out, there was no Arsene Wenger throwing the hair dryer at his keeper. His manager was aware of the habit but simply asked for it not to go on in changing rooms . When he was caught, he was fined but zero confrontation. In fact, Szczesny is man enough not to use cigarettes as his excuse, saying he hadn’t been playing well for 5 months and that was the real reason he deserved to be dropped. Instead of being a youngster not listening to the rules because he liked a good time, this was his ‘comfort’ after a shocking performance.

That Mistake
As we all remember after we lost to Birmingham in the League Cup Final, our season never recovered. Within the next two weeks we also got knocked out of the Champions League and FA Cup while throwing away our lead at the top of the League. Szczesny still maintains three times he clearly called for Koscielny to deal with it only for the defender pulling his leg out at the last moment. Where the keeper does admit guilt is lacking concentration, hinting at arrogance. He now concedes things were going too well in his first full season as number one. He was playing well, getting positive reviews, was popular within the squad, etc. He credits this as a lesson everyone has to go through to become the player he now is.

Wenger was Professional but ‘Cold’
You just sense that Szczesny didn’t have the close relationship that others did with their manager. He’s at pains to stress he didn’t mean ‘cold’ as a negative term, just conversations were strictly football. It might surprise some as the perception in his last few years was of a man who put too much trust in his youngsters yet the keeper says Wenger’s happy, warm image he had was for the media but with the squad he was strictly business. Throughout the podcast the subject admits to a lack of focus and immaturity at times, and maybe he just had a character that Mr Wenger couldn’t understand. As the Pole points out there was a bit of an age gap.

The Squad Lacked Experience
He didn’t quite go as far as Van Persie, as in having a 7-point action plan, or a Fabregas/Sagna by accusing the club of lacking ambition. He does acknowledge though when fans and the media sensed that we couldn’t handle the pressure of March – May, the squad felt it too. To give an insight into our weak mentality he admits to feeling ‘it will be very hard now’ to win the title after a 5-1 loss to Liverpool. Despite the result at Anfield, we were still top of the League, and here’s our keeper at the time admitting he had doubts with so many months left. If we had a true leader, he wouldn’t have been allowed to think that way.

He Planned To Return From Loan
The assumption was that a loan to Roma spelled the end of the keeper’s career as a Gunner, especially when we signed Cech from Chelsea. But not in Szczesny’s mind. He maintains until the day he was sold he had zero intention to stay in Italy. His time in Serie A was a short term move to convince his manager he should still be his Number One and that he was better than Ospina and an ageing Cech.

He Gave Wenger an Ultimatum
You could argue his two seasons with Roma were his best at that point. Winning the Golden Glove in Serie A led to a bid from Juventus. Yet the keepers priority was still to be the number one at Arsenal, which he expressed to Mr Wenger. He rightly pointed out that he hadn’t sulked when dropped, he professionally went to Italy and felt he had now proven he was better then what we had (he was right). He asked the Frenchmen to be fair and if he still only viewed him as back up then sell him. He was sold for 12.5 million.

He Loved Arsenal
On more than one occasion during this 30-minute podcast he speaks about his ‘love for Arsenal’. Having lived in London since he was 15 – at 27 he grew up, became a man at the club and clearly if he had his way never would have left. He says his ‘dream’ now became a ‘regret’ as he was wanting to be like a Scholes and a Totti, a one-club man. He describes the heart beating a little faster when playing for the club you love. He’s very honest towards Roma and Juventus. As a professional, of course he is proud to play for the champions of Italy, but he says there’s a different feeling as he loved Arsenal. By having that type of personality in your dressing room that’s how you make leaders. It’s increasingly looking like we made a mistake by giving away such a talent for 12 million. In my opinion he’s better than Leno and at 30 will only get better.