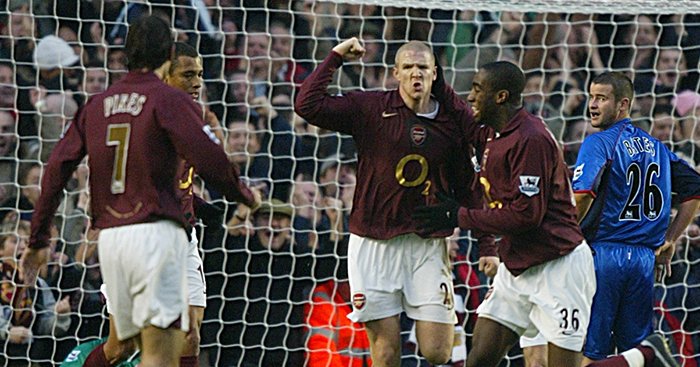 Top 10 Things We Learned In Lockdown With Phillipe Senderos

In Lockdown With Senderos by Dan Smith

The second episode of ‘Lockdown‘ is available on Arsenal’s official website. The latest to be interviewed is Phillipe Senderos, one of many youngsters to be given an opportunity by Arsene Wenger he moved to England as a teenager.

The early signs looked good as he helped us win the FA Cup in 2005, and was part of our back 4 which made history for how long they went without conceding in the Champions League on route to the Final. He made 116 appearances as a Gunner.

Here are 10 things we learnt in Lockdown with Phillippe Senderos..

He Lived With Fabregas
This was mentioned in the first ‘Lockdown’. Senderos was one of many players from this era who was asked to move to England as a teenager. The club have a system in place where they provide accommodation after by putting you up in digs or having you live with a family. While Senderos feels other clubs should do more to support youngsters, he credits Arsenal for making sure he always had a decent support network around him.

He Got Along With Wenger
Unlike Szczesny, who described his relationship with his manager as strictly business, Senderos explains that Mr Wenger went beyond just helping him with football, caring that he was okay in his personal life. Before buying him, Mr Wenger took the time to fly to Switzerland and meet the player and his family. He credits his ex-boss for shaping him into the person he has become and the two remain in contact.

Senderos Starts In the Cup Final
Anyone who has read Sol Campbell’s autobiography will know he got a bit insecure in his last 12 months at Highbury. It’s fascinating though to hear how ruthless Mr Wenger was, even when Sol got 100 percent fit.
Senderos had long been promised if he carried on his form, he would be starting in the Cup Final. Considering our opponents were Man United that’s some faith in a then 20-year-old to be picked ahead of Sol Campbell. It worked, we kept a clean sheet and won the Cup.

Sick on the pitch
You always sensed Senderos summed up Arsenal at the time where maybe mentally he wasn’t quite strong enough for this level? Case in point, so overcome by emotion of living his dream playing at the Bernabeau, he throws up. It worked though, as we still won 1-0 thanks to Henry. Imagine if he played in the Final though.

Drogba
The perception was that his confidence was never the same once Drogba finished with him, but some might be surprised (maybe because he didn’t give too many interviews) that he’s level-headed when recalling their exchanges. He admits Drogba gave him a hard time but points out he did that to a lot of defenders. He defends himself that there were times he played well against the striker. When?

It Was His Idea To Go On Loan
It was Senderos’ s idea to go on loan in 2008 as he was worried that a lack of game time would mean he would miss Euro 2008, which Switzerland were hosting. He in fact had to wait till the summer. He didn’t see this as the end of his Arsenal career though. He wanted to use his short spell in Italy to prove he was still good enough to be in our first team. He would return but only to play two more times for us both in the League Cup.

AC Milan Family
To give an insight into the family environment at AC Milan, on his first day at the training ground players were crying based on those being transferred. It immediately taught Senderos the different culture he had walked into. The defender would eventually play in 6 different countries.

He Admits He Wasn’t Good Enough
After 4 years at Fulham, Senderos admits he wasn’t able to play at the highest level anymore but essentially blagged it. He puts it down to his back problems that were increasingly becoming problematic. He played 8 times in La Liga, 14 in his native land, 8 times in Scotland and 3 times for Villa. Only when moving to America did he enjoy his football again.

Played Too Much Too Young
Like a Michael Owen thinks he played too many games too young and should have been more protected, the same could be the case for Senderos. At 16 he was playing with adults and believes this might be where the back problems started. He doesn’t regret it though as it was that intensity would got him noticed by Arsenal.

Future Coach/Director
Clearly he is passionate about the sport. He is not just currently doing his badges but once a week in Spain is taking a directors course. Could be the next ex-Gunner to return behind the scenes?