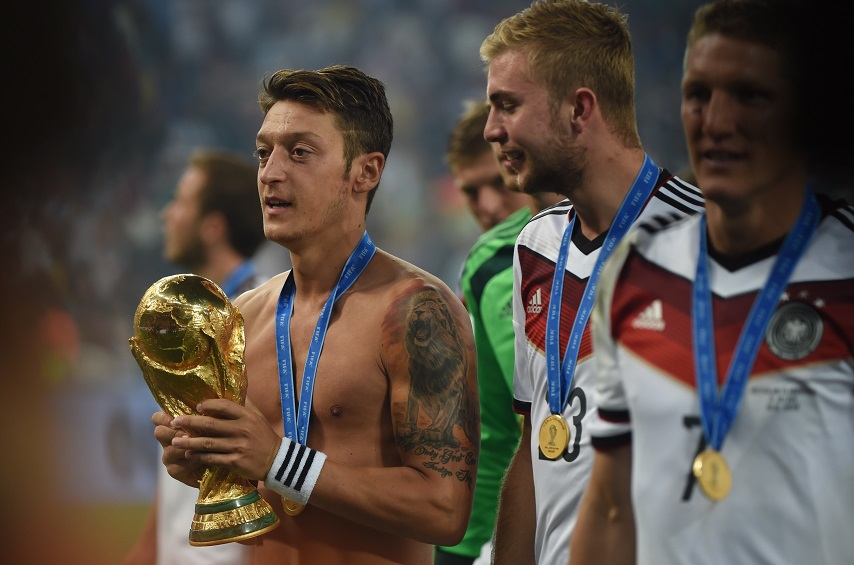 Top Five Arsenal players that starred in the World Cup

Arsenal Stars Who Shone At the World Cup

The FIFA World Cup is the pinnacle of football. It is a tournament that most footballers look forward to with anxiousness.

Arsenal is one of the numerous clubs whose players performed at the Fifa World Cup. They are also amongst a selected few whose players won the FIFA World Cup. Let’s look at 5 Arsenal stars who shone at the World Cup.

5 Arsenal Stars Who Shone at The World Cup

Two of 5 Arsenal stars who shone at the World Cup played for Germany at the 2014 tournament. Ozil first announced himself at the biggest stage in 2010 when his outstanding performance caught the attention of Real Madrid. After the tournament, the European giant signed him from Werder Bremen.

Ozil featured in every match at the 2014 tournament and played a key role in the team. He was instrumental in the group stages where Germany defeated Cristiano Ronaldo’s Portugal 4-0 on their way to the top of the group. He followed up that performance by scoring a 120th-minute decisive goal in Germany’s 2-1 win over Algeria in the Round of 16.

He put in a dominant display in Germany’s 7-1 humiliating defeat of Brazil in the semi-final. He assisted Sami Khedira for the 5th goal of the match which saw many Brazilian players and fans reduced to tears.

While Ozil was exerting his creative ability on the team, Per Mertesacker was guarding the defense at the back. He helped Germany keep 3 clean sheets in all 4 matches he started from the group stages to the round of 16.

In the final, when Germany needed more security in the final minutes, it was he who the coach brought on in place of Mezut Ozil.

Together with Ozil, they helped Germany become the first European team to win the FIFA World Cup in South America.

Fabregas is one of 5 Arsenal stars who shone at the World Cup. He is one of very few midfielders who can claim to have managed game-time in Spain’s midfield between 2008 and 2012.

This was the period when Spain had one of the best midfield in the history of football. They had Xavi Hernandez, Andres Iniesta, Sergio Busquets, and Xabi Alonso as the most preferred players in their midfield positions.

However, Fabregas found a way to put in impressive performances at the 2010 World Cup as he did in the 2008 UEFA Nations Cup.

He featured as a substitute in four of Spain’s seven matches at the tournament. His most impressive performance came at the biggest match of the competition.

Fabregas came on as a 99th-minute substitute for Xabi Alonso and supplied the assist to the winner scored by Andres Iniesta in the 116th minute of the match. That goal ensured that Spain lifted their first-ever FIFA World cup.

Petit is one of the 5 Arsenal stars who shone at the World Cup. Petit was coming out of a very successful 1997/1998 season with Arsenal when he went to the 1998 FIFA World Cup which his country (France) hosted. That season, he helped Arsenal win the English Premier League and the FA Cup.

Petit started all but one of France’s matches at the 1998 FIFA World Cup on home soil. He scored the winning goal in France 2-1 win over Denmark in the group stages but reserved his best for the final.

It was his cross that led to Zinedine Zidane’s opener in the final against Brazil and scored the team’s third goal to ensure a 3-0 win over Brazil. Following that World Cup win, the French team was given the highest national award by their President.

It is not often that a goalkeeper is singled out for his performance in a tournament. Although he is the only player on the list not to win the World Cup, his performance at the 2006 World Cup is worthy of mention.

Jens Lehman featured in six of Germany’s seven matches at the 2006 FIFA World Cup. He kept three clean sheets in those matches.

The highlight of his performance was in the quarter-final match against Argentina where Lehman’s penalty saves helped the team secure a semi-final spot against Italy.

Lehmann made several saves in Germany’s semi-final match but the team missed out on a final spot after quick-fire goals from Grosso and Del Piero in the last two minutes of extra time.

He reportedly offered his spot in the starting XI of the third-place match to teammate Oliver Kahn. For his performance at the tournament, Lehman made the FIFA World Cup All-Star Team.

Arsenal players have always found a way to perform at the FIFA World Cup. The club has produced the most World Cup winners of any English Premier League club.

Apart from the four winners on this list, Lucas Podolski, Patrick Vieira, and George Eastham make up the list of 7 Arsenal players who won the FIFA World Cup.

As you know, the Qatar 2022 World Cup is fast approaching, and Arsenal fans would be hoping for another starring individual performance from their players. But who Will it be?

It may be a smart move to get hands on the comprehensive guide on the Qatar 2022 World Cup to better prepare for the competition as Arsenal fans.