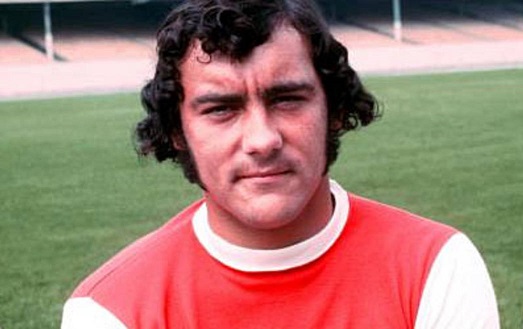 RAY KENNEDY – ANOTHER ARSENAL LEGEND FROM THE WONDERFUL DOUBLE WINNING 1970/71 SEASON AND WHO HAS EXPERIENCED BOTH TRIUMPH AND TRAGEDY:

What a wonderful player Ray was, just look at what he achieved in the world of football, and we let him go for £200,000, admittedly a club record at the time. I have always advocated that Bertie Mee broke up his double winning side too early and this player is an example of what I mean.

After turning professional in 1968, Ray had to wait for nearly a year before he made his first team debut, a 1-1 draw against Sunderland, where he came on a substitute and then had to play reserve team football, when our reserves clinched the Combination Div. One title.

It has to be noted, however, that such was our strength in depth, Bertie Mee only used 15 players during the entire 1968-69 season…but he was patient and it was obvious what talent was about to be unleashed.

He then became a regular and helped win the Inter-Cities Fair cup in 1970 in a strange way really.
He started as sub yet again in the first leg and he scored the vital away leg goal, after we were trailing 3-0 – but Bertie didn’t use him in the return leg as we claimed our first silverware in 17 years, with a wonderful 4-3 aggregate win.

It was an injury to Charlie George (broken ankle) during the first game of the 1970/71 season, that saw Ray replace him and he featured in every other game as we completed our first ever double winning season.

The final game of the season saw us travelling to WHL, needing a 0-0 draw or a win and, with the score at 0-0, George Armstrong’s great cross in the 88th minute saw Ray soared above the Spud’s defence to head in a wonderful goal – the rest is part of our club’s wonderful history.

We became only the fourth side in English football to have achieved this unique feat.

His performance in the cup final was a bittersweet affair, in my view, as he ran the Liverpool defence ragged, but missed some golden scoring opportunities as well.

Ray continued to play under Bertie Mee in the 1972/73 season, but he was struggling with weight issues and he ballooned to over 14 stone, before the club fined him £200, then got him back into shape, under the guidance of Frank McLintock it is said.

There was even a belief that we could have another double winning season, as we actually finished second in the league and reached the FA cup final, but it was not to happen, being bridesmaids in both competitions.

Ray’s form continued to dip however and he explained the reason as being “my game has gone downhill since I got married, but has started to pick up again now I am in bachelordom, I feel that I am better off without her”!!!!

Well, his form did pick up it seems, but Bertie had already decided to replace him with Brian Kidd and his transfer to Liverpool went ahead, ending an Arsenal career that could/should have seen much more success.

John Radford, his striking partner, was quoted as saying the following: “I couldn’t believe it when he left and felt it was a great shame to have broken up our partnership which had wobbled slightly, but which I was sure would come together again with a little time”.

As we know, Raddy was himself sold on just two seasons later and the rest is history regarding The Arsenal.

Without going into Ray’s Liverpool career, I think it’s worth noting what Bob Paisley, the Liverpool manager, had to say about Ray Kennedy in his own autobiography of 1983.

“Ray’s contribution to Liverpool’s achievements was enormous and his consistency remarkable. So much so, in fact, that on the rare occasions he missed a match, his absence was felt deeply, simply because he was a midfield powerhouse with tremendous vision and knowledge of the game…In my view he was one of Liverpool’s greatest players and probably the most underrated.”

Then the tragedy hinted at struck home in such a cruel way for Ray on the 4th November 1984, when he was diagnosed with Parkinson’s disease – it did not stop this man from pursuing his career both in and out of football though.

He became a photo figurehead of the society that was bringing awareness of the disease to the public’s attention and, whilst doing this, he met another famous sufferer of this awful condition, Muhammad Ali, a childhood hero of Ray’s.

On the footballing side, Lawrie McMenemy invited him to do some coaching at Sunderland and, from being a part time coach for three months in 1987, he was promoted to first team coach.

As his condition worsened the PFA stepped in to pay his medical expenses, as his savings were wiped out following his divorce, tax and business problems.

I will not go into any details regarding his divorce, as it is very personal and not very nice either.

In 1993, Ray published his autobiography “RAY OF HOPE”, co-authored by the doctor who was treating him for the disease at that time.

Later in the year, he sold all of his medals and international caps to raise funds for his treatment and, in 2002, was reported to be living alone.

Two years later, he revealed in an interview, that he was suffering from loneliness and hallucinations – following this, a great Liverpool supporter, Karl Coppack I believe, bought him a computer and that allowed him to converse with football fans in chat rooms.

Along with four other Liverpool fans, they raised over £40,000 for essential equipment and services – what were the PFA doing? Well, they have donated money to the cause as well, but I can’t help but reflect on the fact that Gordon Taylor is reportedly earning in excess of £3 million a year with bonuses and salary…when they were formed to support such cases as Ray Kennedy!!!

One other fact I discovered about Ray’s condition, was that it seemed to begin while at The Arsenal in small ways – one being that he had trouble buttoning up his shirt and having shakes in his left arm, although the official date of his being diagnosed was at the age of 35. He now has to depend on daily care, he is housebound and on bad days can hardly walk or speak.

Ray Kennedy is a real Arsenal and Liverpool legend and his fantastic and inspiring football career is tempered by his personal tragedy with Parkinson’s disease.

I found this article one of the most sad and difficult to explore and put down in words – this superb footballer who wore our shirt and scored so many wonderful goals will be part of our history and is honoured by the club with his shirt name around the Emirates – I hope Ray has as comfortable a life as he possibly can and, if he happens to read this, I would love you to know that you are still thought of with the upmost respect and love by the Arsenal fans who were privileged to see you play for our club – thank you for the wonderful memories Ray.

Special thanks to Wikipedia, who have a very detailed article regarding Ray’s life.