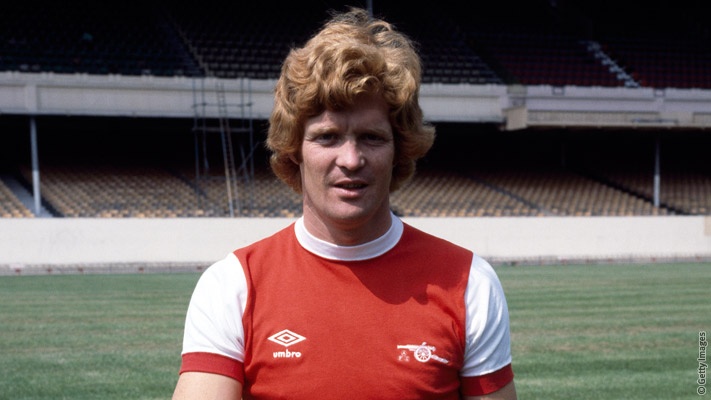 NATIONAL CAREER:
CAPPED 5 TIMES FOR SCOTLAND’S UNDER 23’S BUT BANNED FOR LIFE FOLLOWING A NIGHTCLUB INCIDENT IN COPENHAGEN BY THE SCOTTISH FA.

Willie Young was one of the few players who have made the move across North London and made a success of it.

He started his senior career at Aberdeen, making 133 appearances and scoring 10 goals, before moving south to join another small club, the Spuds in 1975, under Terry Neill. During the summer while at Aberdeen, he worked on the oil rigs to make up his earnings.

In the two seasons he was at WHL he played 64 games and scored 3 goals, but no titles or silverware was forthcoming and, when Neill moved to manage the Arsenal, he then signed the towering 6ft-3inch defender with different outcomes for both North London clubs.

From 1977 until 1981, “Big Willie Young” played 170 league games and scored 11 goals for the Gunners, before moving on to Nottingham Forest.

He played in three successive cup finals for us, a 1-0 defeat to Ipswich, the next year that wonderful 3-2 win against Man United and the loss to WHU by 1-0. He also played in the 1980 Euro Cup Winners Cup loss to Valencia on penalties 5-4.

Willie was a permanent figure at centre half until the 1981/1982 season, where he lost his place to Chris Whyte.

But it was the switch across north London in 1977 that makes Willie such an important part of our history and also the Spuds, perhaps in a much bigger way.

It all came about when Willie was sent off in one of our many derbies that included fisticuffs. The then Spud manager, Keith Burkenshaw, had already had some spats with Willie and this game was the beginning of the end for Willie, as he was dropped – Willie even says that he was told by the manager that he didn’t want Scottish players in his team”!!!

Even though he had cost the Spuds a reported £176,000 when moving from Aberdeen, when The Arsenal put in a bid of £80,000, it was gratefully accepted – and two months later, joy of joys, the Spuds were relegated.

However, his debut for his first really “big club” didn’t go to well, as he gave away a penalty and we lost to Ipswich Town.

Interestingly (following Dan’s great article about mental health and abuse) he recalls being approached by three irate Arsenal fans who gave him some terrible abuse – he suggested they leave him alone or there would be consequences. As with all bullies, they left in a hurry, but Willie says he has never forgotten that episode (shades of Arsene Wenger and the same sort idiots at the train station, but I digress).

He also believes that he was finally accepted as an Arsenal player following an accidental injury he received from Jimmy Rimmer, our goalkeeper at that time. A mistimed punch for the ball, split open Willie’s forehead and he had to leave the pitch for treatment, with bandages applied.

This, of course, had to happen at Highbury against the Spuds, but the injury didn’t deter Willie, as his first action when coming back into the fray, was a flying header. The gooners roared their appreciation and Willie says that from that moment on he believes “I wasn’t ex-Spuds player anymore; I was an Arsenal man.”

Another interesting thing I found out, was the 1979 cup final against United, where he believes that their equaliser actually came off his foot – although he is not sure if it would have gone in anyway… but that was never picked up by the cameras or the media. It was Willie himself who disclosed this in an interview years later.

Winning the cup that day was, according to Willie, “the greatest day of my career. I had left for Arsenal and become a FA Cup winner. It is fair to say I had a few beers that night.”

***Leaving the spuds, seems to be the only way to win trophies… just ask Sol Campbell and Pat Jennings***

His lowest spot seems to be the following year when we lost to WHU at Wembley in another FA cup final.
Paul Allan was in the clear with only Jennings to beat and Willie stopped him in his tracks with a terrible challenge. We all expected him to be sent off, as did Young himself. However, he was given a yellow card with the referee stating, “There was no malice there, it wasn’t dangerous”!!!

I sat there dumbfounded that he had got away with such a cynical foul, but we lost anyway, so it didn’t matter in the end.

Willie maintains that if it wasn’t for Liverpool having such a dominant side while he was at The Arsenal, there would have been more FA cup wins and league trophies, and he also blames them for the WHU final loss, as we had to play them four times in the semi-final before getting to Wembley.

Needless to say, one of our favourite chants were “We’ve got the biggest Willie in the land” and can any of the old fogies out there remember what came after the title singing chant that I started this article with?

Willie Young is one of only eight players to have featured in a north London derby for both clubs, the eight players are: Willie Young- Emmanuel Adebayor -Laurie Brown – David Jenkins – Jimmy Robertson – Pat Jennings – Sol Campbell – and William Gallas.

What makes Willie Young so special for me though is the fact that, when he left the Spuds, they lost a lot of money in the transfer agreed and two months later they were relegated – OH HAPPY DAYS!

Thanks, Big Willie, if only I had been born with the same attributes you had, my footballing dreams (and possibly others) would have been truly fulfilled!!!

Thanks to Daily Cannon, The Scotsman newspaper and Wikipedia for the stats and information.