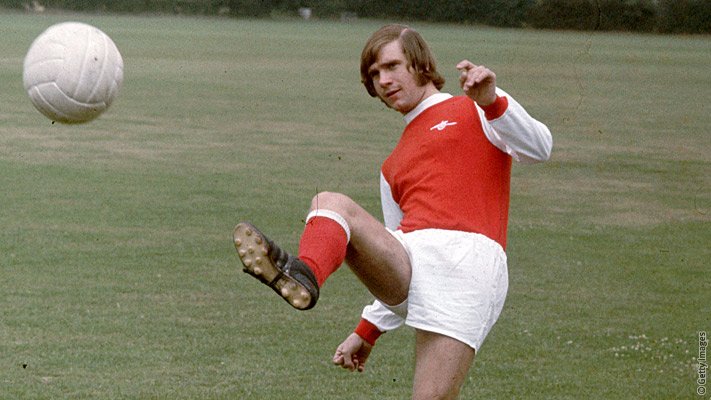 WHERE ARE THEY KNOW? EDDIE KELLY – A MIDFIELD DYNAMO

His career started when he played for his local side Possilpark YMCA who at that time, were a nursery team for The Arsenal.

He then became an apprentice at our club in 1966 at the age of 15, under the supervision of Billy Wright, then signed as a professional player eighteen months later.

He recalls that his salary was £18 a week and a signing on fee of £250, which he was absolutely delighted with – Mesut Ozil eat your heart out!!!!!

He also says that when he went in to sign his professional forms with the then manager Bertie Mee, he asked if the club would help his parents out by buying a three piece suite – Dear old Bertie stood up and ordered him out of the office – it was Frank McLintock who sorted it out, and the next day Bertie told Eddie that the club would help and his parents were given £120 for the purchase of said suite!!!

He was a regular feature in our reserve side before his senior breakthrough against Sheffield Wednesday on the 6th September 1969 and Bertie told him that he would have an extended run of ten games to prove himself… which he did of course.

During this season, he made a further fifteen appearances and scored the opening goal in our 3-0 (4-3 aggregate win) home win against Anderlecht that saw us lift the Inter-Cities Fairs Cup final.

More triumphs followed the next season, of course, as Eddie made 34 appearances during Bertie Mee’s double winning brilliant season.

He was named as the substitute for the final against Liverpool and scored the equaliser, following a goalmouth scramble that saw George Graham initially claim the goal.

It was only after TV replays showed it was Eddie Kelly who made the final touch, that he was awarded the goal…of course Charlie George scored the historic winner as all Gooners know!!!

The incredible thing about all of this though, was that Eddie himself thought that George had scored the goal, saying “it was such a bad goal, I didn’t know I’d scored it!!!

By being awarded the goal, Eddie became the first ever substitute to score in a FA cup final.

Eddie was to miss many games over the next two seasons, due to various injury problems, but the 1974-75 season saw him regain full fitness and he was awarded with the club’s captaincy at the ripe old age of 23 – only Tony Adams has been given that honour at a younger age.

But the next season he lost his place and after making a transfer request, he joined QPR – his complete Arsenal record was 222 games played and scoring 9 goals in total.

Interestingly, he only stayed one season at QPR, before joining Leicester City in 1977 under a certain manager called Frank McLintock’.

After retiring in 1999, he stayed in Torquay and worked for a double-glazing company.

However, it was his time in football, that saw Eddie become a respected sports speaker, performing at after dinner events and he is a popular man around the circuit to this day.

I will always remember Eddie as a really hard tackling player, who gave 100% and seemed to cover every blade of glass during games.

He wasn’t the fastest player ever to wear our shirt, but Eddie was an integral part of our first ever Europe and double winning teams – a real workhorse, a player to respect and someone who wore our shirt with pride. Thank you, Eddie Kelly, – a forgotten hero to many younger fans.

Thanks to Wikipedia, LCFC.com King Power and Champions the Speakers Agency.