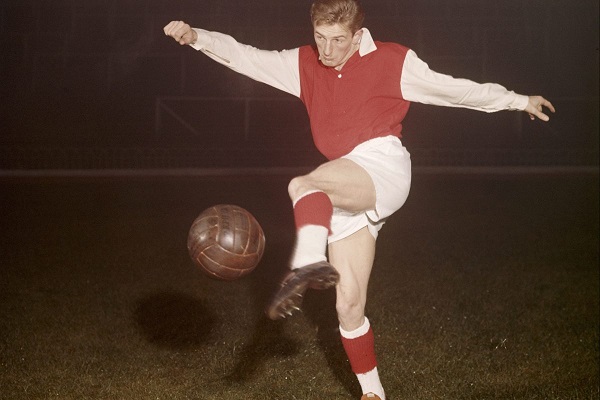 REBEL WITH A CAUSE, A GENTLEMAN, A GREAT FOOTBALLER ALL ROLLED INTO ONE – AND HE PLAYED FOR THE ARSENAL!!! by Ken1945

George Eastham was a player with incredible and silky skills, who graced our shirt for six years and came from a real footballing family.

His father, George Eastham Snr, played for Bolton and Blackpool and was an England international, while his uncle, Harry Eastham, played for Liverpool and Accrington Stanley.

Our George (!!) started his career in Northern Ireland at Ards, playing alongside his dad, who was also player manager at the time.

He moved to Newcastle in 1956 and spent four turbulent years there, including disputes about the house the club supplied him being habitable, along with the secondary job they hadn’t arranged for him (at that time maximum wage rules were in place), despite promising him to get the house in order and supplying a second income job.

Newcastle also attempted to stop him playing for the England U23 team and all this negativity led George to hand in a transfer request in 1959, which Newcastle promptly rejected!!!

At this time in football history, club’s had a “retain and transfer” system, which gave the player no control whatsoever – meaning that Newcastle held his registration documents, stopping him from moving elsewhere and refusing to pay him into the bargain!!!

Unable to leave and/or play football, Eastham went to work for Ernie Clay (later the chairman of Fulham F.C,) and was out of football until October 1960, when Newcastle finally sold him to The Arsenal for £47,000.

In this day of instant news, it’s worth recording that George heard about the proposed transfer, while driving his car.

He says that he stopped at the very next public phone box and rang The Arsenal – he was put through to  Bob Wall, the Arsenal secretary at the time and shouted out to him “Is it True. Is it true?”

To which Bob Wall replied “Yes George it’s true. Newcastle have accepted our offer. You are free to join us if you wish.”

Can you imagine it? “You are free to join us if you wish?” – Typical doing it The Arsenal Way!!!

The irony of this transfer is that The Arsenal could have signed him direct from Ards, when Tom Whittaker was told he could have him for £7,000 by his dad, but (AS USUAL!!!) The Arsenal thought the fee was too high and declined – nothing ever changes at our club does it?!?!?!

Eastham was not going to let it rest there though and, backed by the PFA, he took Newcastle to the High Court in 1963, with the PFA paying him £15,000 towards his legal fees.

George Eastham’s case was heard in 1964 and he argued that he was owed £400 in unpaid wages and £650 in unpaid bonuses (there’s the clauses that I’m always talking about with today’s contracts!!).

The upshot of the case was that he wasn’t awarded these claims, but the “retain and transfer” policy was unreasonable, and this ruling changed the face of the British transfer market forever.

Back to his move to The Arsenal and George Swindin had to get him match fit, after so many months out. His first game for the reserves saw 9,000 fans turn up at Highbury, twice as many as usual, and I was one of them – perhaps that is why I always regarded him as a “proper” Arsenal man… he just stood out as an awe inspiring player to me and after so much awful football, he seemed like the messiah, coming to resurrect our club!!!

His career at The Arsenal really started with his senior debut game against Bolton on the 10th December 1960 – later in the season, he returned to play against Newcastle and (shades of Sol Campbell) he was met with cries of “Judas” and pelted with apples etc – I only thought Sol had gone through all of that!?!?

He was a regular choice throughout his six seasons with us and was the shining jewel amongst a pretty poor team assembled by George Swindin and then Billy Wright – the club never finished higher than 7th while George was at Highbury.

Yet again though, he caused controversy, this time asking for a significant pay rise once the maximum wage  was abolished in 1961 – this time The Arsenal, tried to resist him – once again, they had to give way and George got the wages he wanted….only to ask for a transfer when Joe Baker was signed and replaced him for the start of the 1962/63 season.

Billy Wright became the peacemaker and Eastham’s form returned, seeing him come off the transfer list and during the 1963/64 and 1964/65 season he was a regular and scored ten goals in each season.

However, the Billy Wright era as manager of our club, was one of awful football and when he was dismissed in the summer of 1966, after finishing 14th, George Eastham was fast approaching 30.

The club decided to replace Billy’s older players with younger players and George was transferred to Stoke City for £35,000, ending his time at The Arsenal.

His links with The Arsenal didn’t quite end then though, as he was in the Stoke City side that lost two semi-finals against his old club in 1970/71 and 1971/72.

He did, however, win his only domestic football honour at Stoke City, with a Football League Cup winners medal in the 1971/72 season, along, of course with his World Cup Winners medal while at The Arsenal.

His international career saw him chosen as part of the squad who won the World Cup, but he never played in any game.

At the time, only the eleven players who were on the pitch at the final whistle received medals, but after the FA persuaded FIFA to award said medals to all squad members, George was presented with his by Gordon Brown during a ceremony at Downing street on the 10th June 2009.

Meaning, of course, we have yet another World Cup winner as part of our history of players.

I guess it’s true to say that he is as famous for his stand for the rights of individuals as he is for his footballing career, but I remember him more for his skill and the way he conducted himself as an Arsenal player.

He was a left footed genius, who would light up a game with his creativity and both Geoff Strong and Joe Baker used to pay tribute to him and his great through balls that saw them score so many goals.

I also admire him for the way he took on “big brother” and fought for, what he saw, as justice for the football working man.

I would also put him in the same class as Liam Brady, David Rocastle, Ray Kennedy, Mesut Ozil and Cesc Fabregas with regard to his footballing skills – high praise indeed, but just my personal opinion of course.

Thanks George, for helping to bring our club out of mediocrity, ensuring footballers were not slave labourers, and carrying The Arsenal traditions forward as the gentleman you always seemed to be.

Thanks to Wikipedia, arsenal.com “When footballers were skint” by Jon Henderson for the fact checking I had to do and the stats that appear in the article.