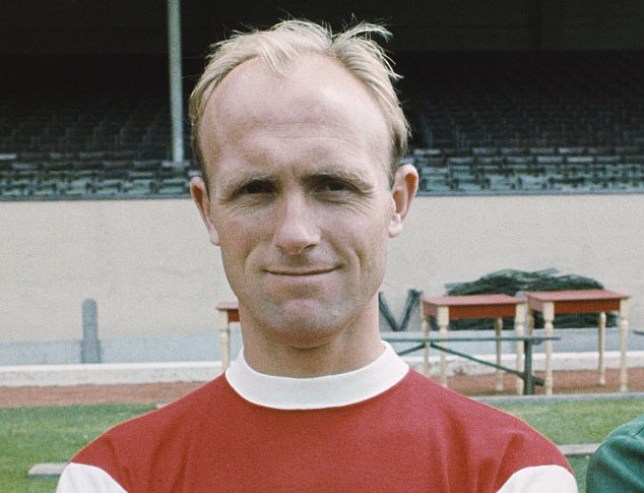 DON HOWE – FULL BACK AND COACH OF ENGLAND INTERNATIONAL LEVEL AND A PLAYER, COACH AND MANAGER OF THE REQUIRED ARSENAL LEVEL AS WELL:

It wasn’t until I went into Wikipedia that I realised what a wonderful and varied life in football Don had carved out for himself.

His time at WBA needs to be covered as it makes impressive reading. He played a total of 379 games and scored 19 goals for them in twelve years and was voted as one of the top sixteen players ever to have worn the famous Baggies shirt.

He turned professional in 1952 but didn’t make his first team league debut until 1955.
His honours at WBA saw him part of the FA cup winning side of 1953-54 however and winners of the FA Charity Shield in 1954.

It was Billy Wright who tempted him away to Arsenal in 1964 and he was immediately made club captain, a position he held until a serious leg break curtailed his Arsenal career.

He played only two further games for the Gunners, totalling 70 in all from 1964 until 1966, when he retired from playing.

My memories of Don were as a hard tackling, no nonsense full back, who took no prisoners, but was very skilful at the art of defending.

He was also an unforgiving captain, expecting every other player to give 100%, just as he did in every game I was lucky enough to see him play in.

After Don retired, Bertie Mee offered him and he accepted the role of reserve team coach and promoted to first team coach when Dave Sexton left in 1967.

It was Don and Bertie who led our club to its first historic double in the 1970-71 season and the two men were like chalk and cheese in their manner, approach, and outward appearance.

Don was the typical track suited, no nonsense “working man” coach type of figure, while Bertie was the well-spoken, always dapper “upper class” type figure – whatever the outward differences were though, these two men enabled us Gooners to finally ram the Spuds taunts about being the only double winners straight back down their throats – a wonderful feeling I can assure you!!!

It was WBA’s turn to attract him back to the Midlands, by offering him the post of manager and, I believe this, and Bertie’s strange decision to break up the double winning side too soon, saw him accept their offer.

However, it wasn’t a success and, after WBA were relegated in 1973, he left to become the coach, and then, assistant manager of Leeds United.

After two years managing Galatasaray, he returned to The Arsenal as head coach to Terry Neil – once again, it seems, filling the “dead man’s boot’s” as Neil was sacked, and Don took over in 1984.

Don introduced young players like David Rocastle, Tony Adams, and Niall Quinn into the first team squad, but was unable to win any trophies and on the 22nd March 1986, he was sacked, and George Graham took over.

It is often said how GG left good players, but he was indebted to Don for the likes of the three players mentioned above as well as: Viv Anderson, David O’Leary, Kenny Sansom, Paul Davies, Graham Rix, Michael Thomas to name a few.

He was assistant manager to another Arsenal old boy, Bobby Gould, when Wimbledon shocked the footballing world, by beating the mighty Liverpool at Wembley in the 1988 cup final – out of the two, my personal opinion is that Don would have had a lot more to do with that win than Bobby!!

Another successful time saw him manage Coventry to stay in the first division by just one point, before he resigned in the 1992-93 season.

He re-joined The Arsenal as part of the Academy set up as Head Youth Coach and finally retired from coaching 2003.

His international career, both as a player and coach, was also impressive. He played in the 1958 World cup and then became part of the coaching set up in 1981 under Ron Greenwood and then Bobby Robson – he was also assistant for Terry Venables from January 1994 to June 1996 and retired after the semi-final defeat in Euro 1996.

Apart from my own recollections of Don, the stats are all from Wikipedia, but I am so pleased that Snowden asked me to do a review of this great footballing man.

He wouldn’t have broken into the Invincibles team in my opinion, as football has changed so much, but his superb knowledge regarding the art of coaching and defending would most certainly not go amiss regarding our current crop of players – I know when I watched him play, he put the fear of you know who up me, what his opponents must have felt, one can only imagine. R.I.P.

I would certainly class Don as a forgotten hero, what does anyone else think?