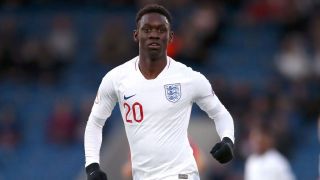 Middlesbrough and West Ham are claimed to have scouted Arsenal youngster Folarin Balogun star for the England Under-21s this week.

The 20 year-old has just two Premier League appearances to his name at present, both of which came at the beginning of the new campaign when filling in with all of Eddie Nketiah, Pierre-Emerick Aubameyang and Alexandre Lacazette having been unavailable.

Our side failed to score in either of those matches, and he has since found himself back with the Arsenal Under-23 side, and there is plenty of talk about a potential move in January.

The Gunners are not expected to sell however, but could well agree to a loan move in order to allow him to pick up some crucial first-team minutes as he looks to continue with his progression.

West Ham and Middlesbrough are now claimed by The Mirror to have taken a closer look at the striker in midweek when he got the nod to make his full debut for the Three Lions youth side, taking less than 30 minutes to get his name on the scoresheet with a neat finish.

In a week where Lee Carsley has also insisted that he needs ‘testing’, it wouldn’t be the worst idea to consider allowing him to join Boro if they were to guarantee him first-team football, something he doesn’t seem close to in north London at present.

It certainly sounds as though he is a little bored of playing outside the senior team, but continues to sound professional when talking to the press. It seems a matter of time however before he eventually gets frustrated with his lack of opportunities, and a loan could fill that void while he continues his progress towards the first-team.

Would the Championship be ideal for him to get some crucial first-team football?