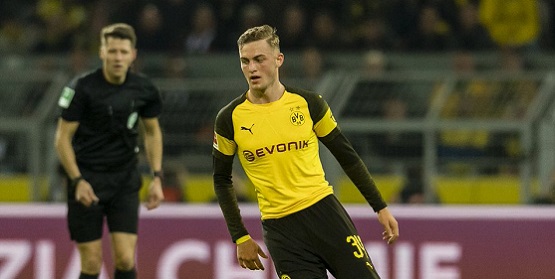 One of the key areas Arsenal are looking at strengthening is on the wings and quite a few players have been linked with a move to North London and according to the media, we can now add yet another name to the growing list.

Already Arsenal has been linked with moves for Yannick Carrasco, Ryan Fraser, Wilfried Zaha and Keita Balde to name just a few and now Borussia Dortmund youngster Jacob Bruun Larsen can be added to the shopping list.

However, Arsenal does face stiff competition from Liverpool and Manchester United for the 20-year-old’s signature.

I cannot say I know much about the young man but according to the reports he has had a breakthrough season with the Bundesliga outfit and must have shown something if you have three of the top-six in the Premier League chasing after him.

Larsen featured in 30 matches last season for Dortmund, starting on 17 occasions, scoring three goals, and made his debut for Denmark back in March.

The youngster has been on duty at the European Under-21 Championship, scoring against Serbia in the group stages..

It is difficult to know who the front runners are based on the reports, of course, a lot is made of Liverpool manager Jurgen Klopp’s influence with his former club but I am not convinced by that. United are spending money freely right now and anything is possible with them.

As for Arsenal, well, we need a winger for sure but as everyone knows we have a limited budget and cannot offer Champions League football but then again, neither can Man Utd.

A fee of £15 Million has been mentioned which does seem a little on the low side but if that is correct then at least it is an amount we can afford.