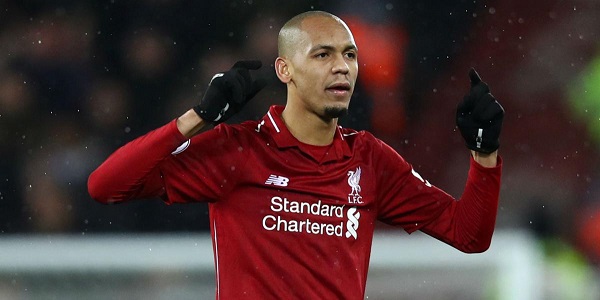 These days Fabinho is one of the first names on Liverpool’s team sheet and rightly so after helping the club win both the Champions League and the European Super Cup, but Fabinho could have ended up at Arsenal.

The Brazilian midfielder developed his career at AS Monaco and Unai Emery watched him as he helped Monaco win a league title and thrive in the Champions League.

The Spaniard added the midfielder to his list of targets when he finally got the Arsenal job, but Liverpool signed the Brazilian from under their noses.

Fabinho has gone on to make a name for himself at Anfield while Emery was forced to settle with Lucas Toreira who can’t even make the Arsenal team nowadays.

Fabinho did struggle in the early days of his Liverpool career and the Spanish manager used him as an example to urge fans to give new signing Nicolas Pepe time to adapt to the Premier League.

The Ivorian has struggled since the Gunners paid more than £70m for his signature last summer. Pepe missed Arsenal’s best chance to open the scoring against Sheffield United on Monday and has come under renewed scrutiny.

“We spent money with Pepe, but Pepe needs time to adapt to the Premier League,” he said.

“For example, in France I loved a lot Fabinho. He was in Monaco and I wanted to sign him for Paris Saint-Germain.

“When I arrived here, also his name was on the table to achieve to sign him, but he signed for Liverpool.

“The first six months he didn’t play, it was adaptation. But now he is amazing and I want the same with (Dani) Ceballos, with Pepe.

“We need patience, but Pepe is improving. On Monday, the key to win was with him. If he scores the first goal, it’s different.

“But it’s one process and I believe in him and I know we need time and patience. The supporters have patience, some more than others.”