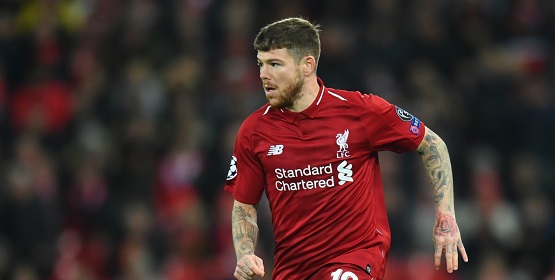 It is being reported that Arsenal manager Unai Emery is interested in the services of Liverpool flop Alberto Moreno and I can imagine there will be some kneejerk reactions to that news, mainly negative.

But I am not so sure that it would be such a bad idea, for starters Moreno is only 26-year-old and therefore not a player past his best.

I will admit that Moreno has had a very inconsistent time with Liverpool and was prone to mistakes but a lot of that had to do with the way Liverpool play utilising wing backs flying down the wing and that compromised Moreno’s game.

There are reports that Emery wants to use a back four next season as opposed to three central defenders complimented with wing backs and that would suit the Spaniard far better, he is not great at playing the wingback role and to be honest, there are not that many that are just look at the travails of Ainsley Maitland-Niles and Saed Kolasinac and the same applies to our rivals who have also struggled in that area, only Man City and Liverpool have pulled it off.

Of course, if we do stay with the formation that we used last season then I would question signing Moreno, but as stated above that is not what Emery is reported to be doing.

Moreno would be a good addition for the left-back role in defence and let’s be honest, we have not had anyone consistent in that position for some time now.

Wages would not be huge and of course, there will be no transfer fee.

It should also be noted that Moreno worked with Emery in Spain and there he was a success, maybe the manager can get him back to his best.

For me, the risks are low compared to the upside and it would not affect our transfer budget and add a player to our squad that could easily get back to his very best with the right man management.