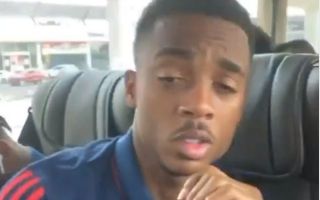 The Gunners defender pranked several of his teammates while they were sleeping on the team coach.

Luiz also woke up Eddie Nketiah, Bukayo Saka, Nicolas Pepe and Rob Holding with his antics, but Willock’s reaction was by far the best.

The 20-year-old was left stunned after Luiz squeezed his nose to wake him up, startled Willock slapped the camera out of his face.

Check out Luis pranking his teammates below:

A dive into the replies on Luiz’s post will show Willock commenting ‘Sleep with one eye open David’.

The prank wars are about get underway.