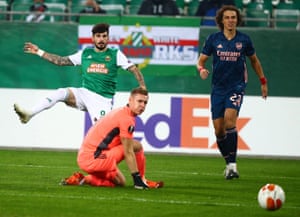 Arsenal have conceded the opening goal in Austria, as Rapid Wien take advantage of our limited display thus far.

The Gunners have decided to start the fixture with a 4-4-2 formation for the first time this term, and while the opening half looked hopeful for positive football, our team has been punished for their minimal approach.

Bernd Leno is the man at fault for the goal, losing possession inside his own box to Taxiarchis Fountas to put his side ahead.

A costly defensive mistake from Arsenal 😳

Bernd Leno loses the ball in his own area and Fountas makes no mistake for Rapid Vienna!

Work to do for the Gunners… pic.twitter.com/V2h0eSQmZW

Arsenal will now have to raise their game significantly to get the three points in Vienna, and I wouldn’t be shocked to see us change the system being used to make that happen…

Aubameyang is set to come on, and fingers crossed this will bring the improvement needed to secure the win.