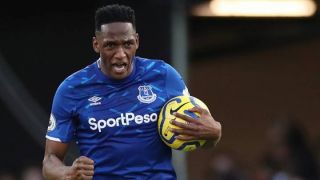 Video: Arsenal fall behind again as Everton take lead into the break

Everton have taken the lead back just before half-time, with Arsenal now trailing 2-1 at the break.

Yerry Mina was the man to put his side back ahead with a crucial header, having got on the end of Gylfi Sigurdsson’s corner.

The defender ran short to get onto the ball early, and our team was unable to deny the strong header.

After Dani Ceballos swiped his studs at him a moment earlier, Yerry Mina gets his big head to a corner & puts Everton in front again.

Despite our confidence being low, we have actually played reasonably well thus far, and will hopefully be able to claw out a result despite the setbacks.

Do we deserve to be behind?