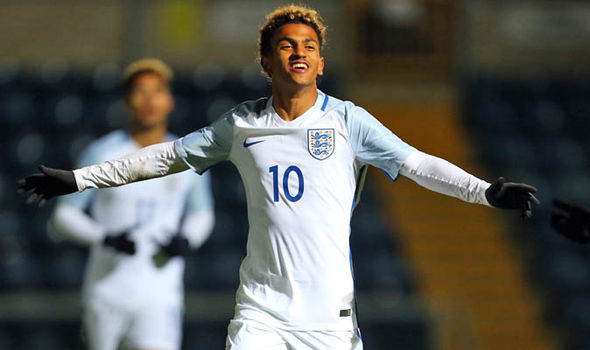 Arsenal players Reiss Nelson and Joe Willock have taken to Instagram to praise their former England youth team-mate, who has taken the Portuguese league by storm.

Marcus Edwards left rivals Tottenham last summer to join Primeira Liga side Vitória de Guimarães, and has hit the ground running this term. The 20 year-old has notched up four league goals and seven assists, but his ball control and drippling is what really sets him apart from the rest.

The latest skit which can be seen below has caused a stir, with both Reiss Nelson and Tottenham’s Ryan Sessegnon calling him Messi, a name former manager Mauricio Pochettino likened him to.

Before his debut in 2016 against Gillingham, Pochettino had said: “His qualities … it’s only looks – his body and the way that he plays – remember a little bit from the beginning of Messi.”

The winger is available for as little as £13.6 Million this summer, a clause installed in his contract upon signing, with Tottenham expected to get half of any future fee supposedly.

With Arsenal expected to have a limited budget to work with this summer, could Edwards be on the shortlist of players to bring in? Could his previous allegiances with Willock and Reiss Nelson help pave the way for a move?