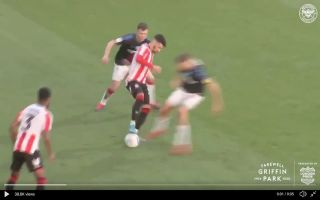 Brentford sensation Said Benrahma produced a moment of pure magic during his side’s 3-2 victory against Middlesbrough on the weekend.

With Benrahma holding the ball towards the corner, the tricky attacker effortlessly nutmegged Wing with some fancy footwork.

Benrahma didn’t stop there though as he bagged a second nutmeg on Wing just seconds later with a lovely back-heel pass.

Take a look at Benrahma’s insane skills below:

What a player!
(Vid via @BrentfordFC) pic.twitter.com/AqEYrtyCHr

According to the Sun, Arsenal are set to join Leicester and Newcastle in the race to sign one of the Championship’s most exciting players in the summer.

The Sun claim that a fee of £15m may convince Brentford to part ways with their prized asset.