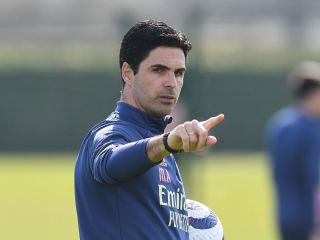 Mikel Arteta refused claims that Arsenal’s Europa League clash next Thursday would take priority over a result against Liverpool.

You can be forgiven for believing that the Gunners best chance of European football is via winning the Europa League, having fallen to ninth in the Premier League table.

Winning the EL will be no easy task either with seven other teams also hoping to lift the trophy, but it is way too early to be putting all your eggs in one basket, and I would have been disappointed with Arteta if he wasn’t giving our team the best shot of beating Liverpool.

Is it too soon to concentrate on the EL? 🔴⚪️🔴⚪️ pic.twitter.com/oYSZyZafZN

Will the Spaniard name a team with Slavia Prague in mind despite his comments?