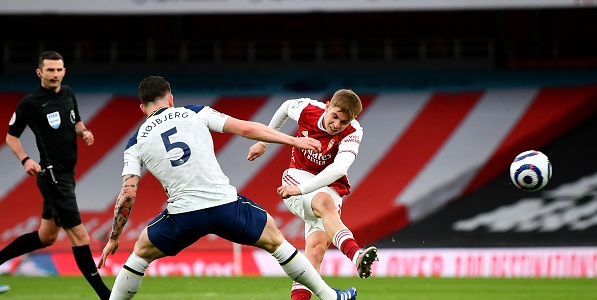 Emile Smith Rowe put in another highly impressive performance in the victory over Tottenham at the weekend, and Arsenal boss Mikel Arteta is more than happy with his input.

The 20 year-old has been called up for the England Under-21 side ahead of the Under-21 European Championships this summer, closing the door on any outside chance he had at playing for the senior side.

While some will be shocked by the decision, there is more than enough talent already proven in the senior side, but you would be very surprised if Smith Rowe wasn’t already being considered by Gareth Southgate.

Mikel Arteta is certainly impressed by ESR, and talks up what he brings to the squad.

Should he be in with a chance of making the England squad this summer? 👀👀👀 pic.twitter.com/V6dVMMDAMM

Am I alone in rating the potential of Smith Rowe as highly as Bukayo Saka despite the age difference?

Arteta explains why he didn’t drop Tavares against Newcastle
1 December 2021, 17:02

Mixed messages from Arteta who claims Arsenal will be ‘very alert’ in January
1 December 2021, 13:30