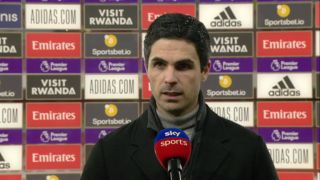 Video: Arteta praises his players who are defending ‘with their lives’

Arsenal manager Mikel Arteta claims that he asked his players to defend ‘with their lives’, and that they are doing exactly that.

David Luiz was spotted celebrating his key block in the heart of the defence yesterday as he helped his side to keep a clean sheet against Premier League title challengers Manchester United, and the manager is happy with the way his side have improved at the back.

🗣 "Everyone is defending those situations with their lives."

The Spaniard has now gone three matches without conceding against United, while the team has only conceded twice in the PL since Christmas.

Does the manager deserve immense credit for inspiring our defence of late?