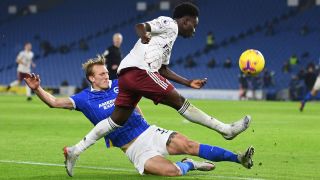 Arsenal boss Mikel Arteta has urged people to take caution against putting too much pressure on Bukayo Saka.

The teenager is already showing his worth to the first-team as he continues to earn his place in the team with a number of outstanding performances, and yesterday was no different.

The manager was asked if Saka had to be rated as the hottest prospect in England at the moment, and while anyone with sense has to believe so, Arteta is keen to allow him to progress naturally without distraction.

Arsenal boss Mikel Arteta plays down Bukayo Saka in order to try and keep him grounded, but let's be real… The sky is the limit for the 19 year-old and he is already kay to all things on the pitch 🔴⚪️🔴⚪️ pic.twitter.com/AU3zPj7SsG

Is Saka the first name on the teamsheet?