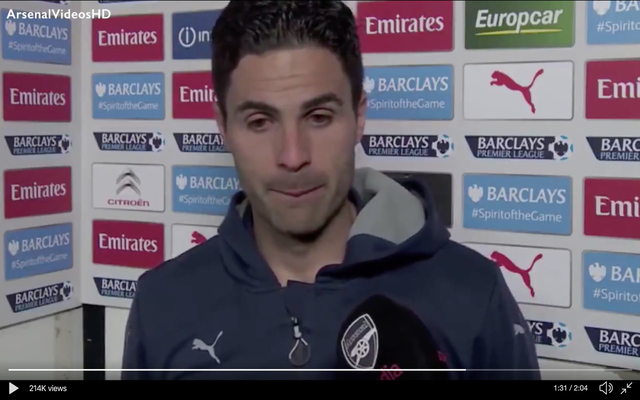 Video: Arteta’s love for Arsenal on display in final interview with the Gunners

Some Arsenal fans may change their stance on Mikel Arteta potentially becoming our next manager after seeing this heartwarming interview from the Spaniard.

After his final game for the Gunners back in 2016, our former captain can be seen holding back the tears as he struggles to comprehend how ‘honoured’ he felt to play for us.

Arteta enjoyed five years at the Emirates Stadium, the retired midfielder won the FA Cup and Community Shield on two occasions during his time in north London.

It’s fitting that this clip emerges now that the Manchester City assistant is being heavily linked with our managerial vacancy.

The Daily Mail claimed that Arteta held talks with Arsenal chief Josh Kroenke last night, it’s reported that the meeting between the pair was set to act as the third and final step of the Spaniard’s interview process.

Take a look at the Spaniard’s emotional final interview below:

Arteta's last interview as an Arsenal player. Talking about what Arsenal meant to him. 🥺pic.twitter.com/0amoR5Yf2L

Read More: One of our writers believes that Arteta’s appointment will divide the Arsenal fans.

Arteta was an amazing servant to us on the pitch and this interview perfectly highlights his love for the club, this surely makes him a prime managerial candidate.

For all the things that a manager can be questioned on, at least the 37-year-old’s passion and desire for the club would never be in doubt.