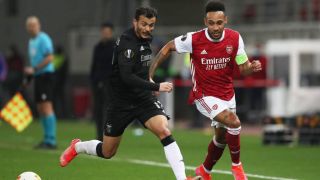 Video: Aubameyang’s winner as Arsenal come back from death to qualify

Arsenal have accomplished the unexpected after they moved to come back from behind in the second-half.

The Gunners looked dead and buried as the Portuguese giants moved 2-1 up in the second half, meaning that they were not only 3-2 down over the 180-minute tie, but even another goal would mean they were to be eliminated on away goals.

Tierney scored the goal to level the tie, but in the 87th minute Pierre-Emerick Aubameyang popped up again to seal our place in the next round.

What an amazing European night, and one which won’t be forgotten in a hurry, but hopefully we will be having many more celebrations to enjoy as the rest of the competition runs on.