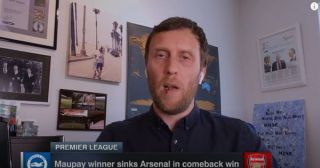 One of the talking points from Arsenal’s defeat against Brighton this afternoon was the challenge from Neal Maupay on Bernd Leno that resulted in the German being stretchered off and most likely out of the game for a good few months.

It appears that the Arsenal players had carried their anger towards the Brighton match-winner right till the end of the game and confronted him at the final whistle, especially Matteo Guendouzi who grabbed Maupay by the throat.

It is a shame that the players never showed that sort of passion in the game and it is questionable whether they would have gone after the Brighton forward if Arsenal had won but that is one to be debated later.

ESPN’s Matt Ogden was not impressed with how the Arsenal players reacted. Watch the videos and listen to his comments and let me know in the comments below what you think of what Ogden had to say.

At least one Arsenal player does not hold Neal Maupay responsible for Leno injury
22 June 2020, 17:45

“What tickled me was the way he spoke about the Arsenal players” Ferdinand on Maupay comments
21 June 2020, 7:45