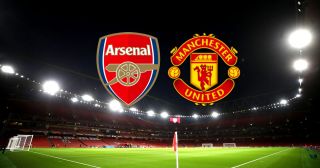 Of an interesting game between Arsenal and Man United, this miss by Marcus Rashford will be heavily remarked upon if Man United walk away without a win today.

He was standing unmarked just a couple of yards from goal, and if he had just hit it immediately with his left foot it would have been a certain goal, but instead the United striker tried to control the ball with his right foot, and before he knew it he was totally surrounded by Leno and the Arsenal defence….

Our message to football fans around the world…