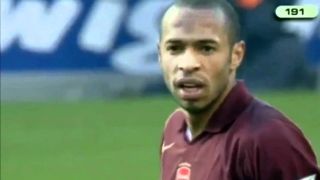 Thierry Henry certainly has a sense of humour!

Arsenal legend Thierry Henry has explained the story behind one of his famous goal celebrations after scoring a stunning free-kick against Wigan.

Watch the video below as Henry, in conversation with James Maddison, says he was prevented from trying one of his notable tricks – taking the free-kick quickly.

This method saw the Frenchman find the back of the net against Aston Villa and Chelsea in the past, but he says the referee blocked him from trying it against Wigan.

So when Henry scored anyway, he made a point of trolling the ref about it.

You can see the goal against Wigan, and the celebration, below: