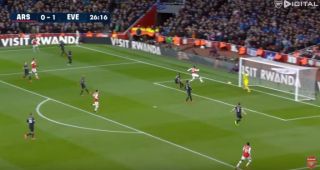 There were goals galore when Everton Visited Arsenal Sunday afternoon.

The game between Arsenal and Everton was certainly a thrilling affair and one thing that was not in short supply was goals.

Everton took the lead within the first minute before Arsenal hit back with two from Eddie Nketiah and Pierre-Emerick Aubameyang.

Everton was not done and knocked in their second to even things up just before half time.

The way both teams were playing a load more goals were expected in the second half, however, there was to be just the one and it went Arsenal’s way thanks to Aubamayeng.

This video comes courtesy of the Arsenal official Youtube channel.