Arsenal are linked with potential move to sign Alassane Plea from Borussia Monchengladbach this summer, but who is he?

The striker started his career with Lyon, but failed to land a regular first-team role with the club before quitting to join Nice in 2014 when his career starting to take off.

In 2018 he later decided to move to the Bundesliga with Monchengladbach where he has earned the right to be considered a regular outlet for goals and assists.

Plea is comfortable playing as the centre-forward, but is equally adept at playing on the wings. He has 12 goals and five assists in his 37 appearances in all competitions this term, and the DailyMail claims that both Manchester United and Arsenal are eyeing a potential bargain £15 Million deal.

Whether Arsenal do part with one of Aubameyang or Lacazette, Plea could well prove to be a great option for various attacking roles, an area that has been exposed in recent weeks.

Does Plea look a snip at only £15 Million? 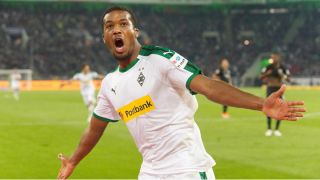