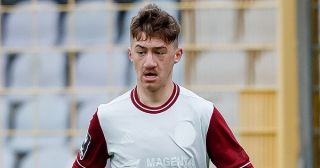 Arsenal are linked with a move to sign Angelo Stiller this summer, but who is he?

The 19 year-old is currently plying his trade in Germany with Bayern Munich’s under-19 and reserve sides, where he has notched up three goals and 10 assists in his 23 competitive outings thus far this season.

The youngster has been with his current club since 2010, but having been overlooked by first-team coach Hans-Dieter Flick he could well be open to a move this summer.

Stiller gets involved at both ends of the field and would have to be described as a box-to-box midfielder, whilst his ability in deadball situations also sees him regularly taking free kicks and corners also.

Our club is believed to be preparing for a strict summer transfer budget, and pairing that with the fact that Dani Ceballos will return to Real Madrid at the end of his loan deal, we may well be looking at what could be deemed a riskier option.

Take a look below at some of his best bits, and let us know what you think below.

Could Stiller be the long-term replacement for Ceballos? Does he fit the type of player that Arteta could be looking at this summer?