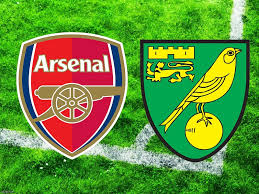 Today’s View From The Enemy comes direct from the official Canaries website, and they have a very good preview with an honest insight into Arsenal’s current situation. We have already spoken about Norwich’s good recent form and we are not expecting them to just turn up to make up the numbers. This could be a real test for our reserve side this evening….

In Focus: Arsenal v Norwich City
The Canaries travel to Arsenal hoping to shock the Premier League outfit and book a place in the quarter-finals of the Carabao Cup.

Wins over Swindon, Charlton and Brentford in the first three rounds of the competition have put Norwich into the last 16, but the Gunners are sure to provide sterner opposition at the Emirates.

With City taking a mammoth 8,800 fans to north London – the Club’s biggest away following this Millennium outside of play-off finals – Norwich will be backed by tremendous support as they look to cause a League Cup upset.

We take a look at what Arsene Wenger’s outfit will have in store for the Canaries.

Form guide
Arsenal have enjoyed a productive spell over the last month, winning six of their last seven matches and eight of their last 10.

It is a significant recovery following two defeats in their opening three Premier League matches, including a chastening 4-0 loss at Anfield in August. Since then they’ve lost only once, when they went down 2-1 to Watford two weeks ago.

Summer signing Alexandre Lacazette (below) has found his feet quickly in England, hitting the net five times – including in the impressive 5-2 win over Everton on Sunday.

Theo Walcott was their matchwinner in the third round of the Carabao Cup, when his 25th-minute goal was enough to give Arsenal a narrow victory over League One Doncaster Rovers at the Emirates. Wenger picked a relatively inexperienced XI against Doncaster, but it was sprinkled with star names such as Alexis Sanchez, Walcott, Jack Wilshere and Olivier Giroud.

League Cup record
Arsenal are two-times winners of the League Cup – and one of their wins is significant in Norwich’s history.

They first entered the competition in 1966-67, reaching the third round. They came close to lifting it in the next two seasons, but were twice beaten finalists. They were defeated 1-0 by Leeds United in 1967-68 and the following year were on the end of a shock 3-1 defeat to third division Swindon Town.

They would have to wait until 1986-87 to finally lift the trophy. Charlie Nicholas struck twice at Wembley to give Arsenal a 2-1 win over Liverpool. They had the chance to make it two in two the following season, but they were surprisingly beaten by Luton Town in the final.

Their second Wembley win came in 1992-93, beating Sheffield Wednesday 2-1. They also faced Wednesday in the FA Cup final a month later, with all Norwich fans hoping for a repeat result to seal City’s place in Europe. Arsenal obliged in a replay, with former Norwich defender Andy Linighan heading the winner past former City goalkeeper Chris Woods for the winner.

Since then, Arsenal have twice been runners-up and on five times beaten semi-finalists, but they have yet to taste League Cup glory again.

Previous meetings
City haven’t won at Arsenal since Mark Robins’ famous double in the 4-2 win on the opening day of the inaugural Premier League season in 1992, when Norwich came from 2-0 down at half-time to win at Highbury.

The clubs have met 17 times since that day, with Norwich winning only once – a Grant Holt strike giving City a famous 1-0 win at Carrow Road in 2012 as part of the Canaries’ 10-game unbeaten run under Chris Hughton.

City’s last trip to the Emirates ended in a 1-0 defeat, with Danny Welbeck scoring the 59th-minute winner in April 2016. Peter Cech twice denied Nathan Redmond as they desperately looked for an equaliser in their battle against relegation.

Norwich came away from the Emirates with a point in 2012 after a pulsating 3-3 draw. Steve Morison scored a famous 85th-minute equaliser for the Canaries after Wes Hoolahan and Grant Holt had put Norwich 2-1 up after falling behind.