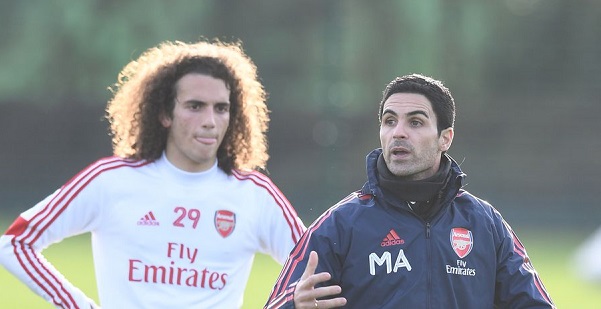 Was Matteo Guendouzi left out of Newcastle game for disciplinary reasons? Mikel Arteta answers the question

Matteo Guendouzi has been rumoured to have had a bust-up with Mikel Arteta.

The media have been in overdrive this week with claims that Matteo Guendouzi having a massive falling out with Mikel Arteta and that very same media were quick to ask the Spaniard about why the young French midfielder was left out of the squad for the Newcastle United game.

Asked about Gunedouzi’s absence, Arteta said the following as per Arsenal.com,

Then Arteta was aksed if dropping Guendouzi was a disciplinary measure, he responded,

“It was about the way we train, the way we play, the way we live. I want the best players for the game and I select them in relation to what I see on a daily basis”

In better words, Arteta neither confirmed or denied there was a bust-up or that he was left out of the squad for disciplinary reasons and that is exactly how it should be.

The truth is that no one has a clue what really happened, it is not like there is any video evidence as there was when Mario Ballotelli and Roberto Mancini came to blows on the Man City training pitch.

The chances are that something has happened but as it stands today there is no evidence one way or the another.