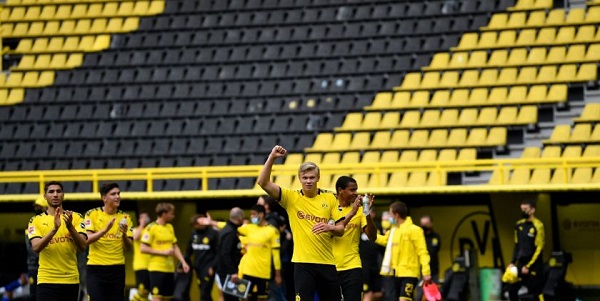 Was the return of the Bundesliga a success? Or not?

Return Of Football In Germany – Was It Safe? By Dan Smith

Okay, I’m not the sharpest pencil in the pencil-case so I might need some help from our readers. This is not a debate on the morality of Football returning. I think we have all exhausted our opinion here on JustArsenal and no doubt will again.

Many fans (more than normal) would have watched the Bundesliga this weekend to get early ideas how the game will be played for the foreseeable future (even though I need to stress you can’t compare the death rates Germany have experienced compared to the UK over this virus).

My attitude has always been you are either saying you believe it’s safe to play sport, or you don’t. There can’t be a grey area where it comes down to a person’s welfare. Well, apparently there can be..

Essentially the protocol seems to be that whenever possible players, coaches, officials, the media, etc (all in self isolation before kick-off) will try and respect social distancing. That tells me then that your government feel that the spread of the illness is very much possible.

Then though, you undermine all those measures put in place by saying it’s practical to have people pulling and tugging at one another during set pieces. That’s the equivalent of McDonalds asking customers to sit far apart, then put the Burgers in the middle table and say let’s all tuck in (although even then you could avoid the physical contact that tackling guarantees).

If a player is required to wear a mask before he enters or leaves the stadium, that tells me you’re still taking this Pandemic seriously? Then though, you go against your own action plan by having the one area where it’s okay to not have your mouth covered, being the one area where you will constantly be standing side by side, sweating on top of one another. How backwards does it look that substitutes are protecting themselves at all costs but not those playing?

Oh, and if your saying that’s because measures have guaranteed that the 22 players participating don’t have symptoms, then why the warnings of no talking or spitting (hard to avoid as an athlete)?

The biggest PR spin is getting the ball boys and girls to sanitize all footballs before, during and after kick-off. Sorry? It’s bad enough we are putting young children at risk, because apparently no one else can go and get a ball in an empty stadium, but they are the ones who have to clean away any germs?

You should be returning to work if it’s safe. That’s your employers responsibility. How can we be telling a child that you’re not in any danger chasing that ball, but here’s a mask, gloves, a protective suit, oh and whatever you do be very careful around …… the footballs!

I know some will disagree with me.

The counter argument will be players are tested, temperature-checked and they are kept away from the public in hotels, etc. Yet if you believed that, why the need for any regulations once inside the venue?
If you are convinced every man and women is healthy before leaving that coach then why the need for advice as far-fetched as; ‘when you make a challenge try to have your head turned the other way’? It’s because there are no guarantees. Unless your rules are being policed you can never predict what someone will do.

A week after this country was told to stay indoors, Jack Grealish was caught at a house party till 4 am. A Kyle Walker was always going to do what he wanted. Why should his brother not have a stripper for his birthday, or he not drive to see his lonely sister? Why should he compromise?

Less than a week after Boris Johnson said it was okay to see one member of your family in a park – 2m apart – but still try to avoid transport, Lacazette translated that as ‘let’s inhale nitrous oxide‘.

Clubs followed all the standards to resume parts of training. How did 3 Brighton players become ill if everything was risk-free?

So major football is back in Europe, but having observed it I have more questions than answers. I certainly can understand players who don’t feel comfortable. Maybe gooners you can educate me?