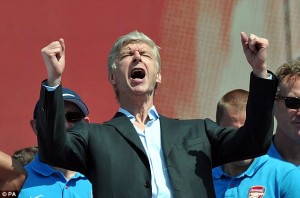 Arsene Wenger may have an Arsenal injury list to cope with, including two of the forwards in his squad DannY Welbeck and Lucas Perez, but that does not necessarily mean that the boss will have to field a weakened Arsenal side when we go to Old Trafford for the big Premier League match of the weekend against Jose Mourinho and his misfiring Manchester United.

While the home team will be without their first choice centre forward Zlatan Ibrahimovic because the Swedish striker picked up a fifth yellow card of the season in their last game, Wenger will be able to name the same front three that have been doing so well for us recently.

The injury concerns about Alexis Sanchez were blown away bigtime last night as the striker played and scored twice for Chile to help his country beat Uruguay, while Theo Walcott played over an hour for England and was a little unlucky not to score against Spain.

Alex Iwobi also impressed for Nigeria on Saturday and all three should be rested and ready for the game on Saturday. Wenger has options as well, with Giroud having featured in both of the games for France during this international break, so with Mourinho missing two first choice centre backs in Chris Smalling and Eric Bailly as well as their main striker, should Man United fans be very worried about what the Arsenal attack will do to them on Saturday?