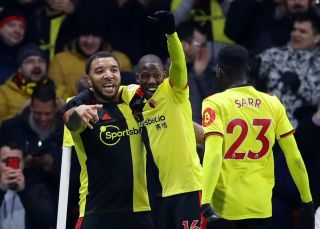 Watford did us a big favour yesterday!

Watford tweeted Arsenal with a simple message after beating Liverpool 3-0 yesterday in the surprise result of the weekend.

The Hornets ended Liverpool’s lengthy unbeaten run, ensuring both Arsenal’s achievements of an entire season without defeat and the English football record of 49 games in a row unbeaten remained intact.

Arsenal have not had much to celebrate this season, so it’s fair to say it meant a lot to at least be able to hold on to our incredible and unique achievement of 16 years ago.

Of course, it doesn’t make up for our poor campaign, with focus now needing to be on trying to win the FA Cup, and of course doing anything we possibly can to stay in the fight for the top four.

We’re in action against Portsmouth tomorrow night, so for now at least, let us enjoy Invincibles day!