“We want to win the FA Cup for the Arsenal fans!”

Arsenal had to slog it out with Reading for 120 minutes yesterday evening, but we somehow managed to reach our second FA Cup Final in a row. Our Spanish midfielder Santi Cazorla, who played the whole two hours, says the Gunners now want to go and get the trophy again for the Arsenal fans.

Cazorla told theFA.com: “We want to win for the fans. It’s always special to play at Wembley and we have a good opportunity to get the title,” he said following the win.

“Now we have to wait for the other team – Liverpool or Aston Villa.

“It was difficult. We played against Reading and [we know] from the game last year against Wigan that it’s not easy to win the game.

“The team tried until the end of the game and now we have to play the Final.”

“We need to play well if we want to win, but today we sometimes lost organisation. It’s very important for us.

“When we play organised we win and in the second half we lost this organisation. Now we have to prepare for the Final.”

Okay Santi, now go and ger organized and go out and get us the trophy. I think it would look nice in my living room, just beside the TV lol!

Now these quotes are from the Official FA website, and with it being there Cup an all that, you would think they would know what they were doing? Well have a look at this screenshot of the page with Cazorla’s quotes on, and see if you can see the mistake…… 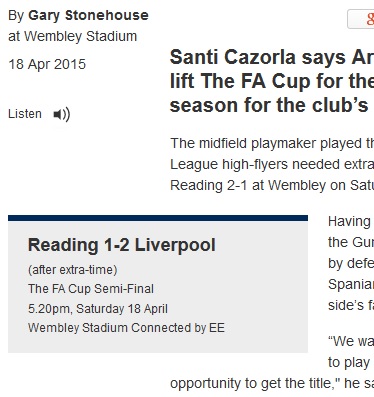 Howler by the FA!

I think the Football Association should pull it’s socks up!