The London Mayor this week has reached out to clubs in the Capital City to ask for any help they can give to help ‘protect lives’. Sadiq Khan wrote a letter to 10 sides, including Arsenal of course, asking for support in three key areas.

Access to any medical staff, use of medical resources and if possible, accommodation for those working away from their families.

As part of their complex Chelsea own, the Millennium Hotel, where NHS workers can stay free of charge. Spurs and Palace are allowing their stadiums to be used for whatever help is needed, storing food, space to train and use of any equipment.

Arsenal have put together their own 9-point action plan which was published on Arsenal.com… 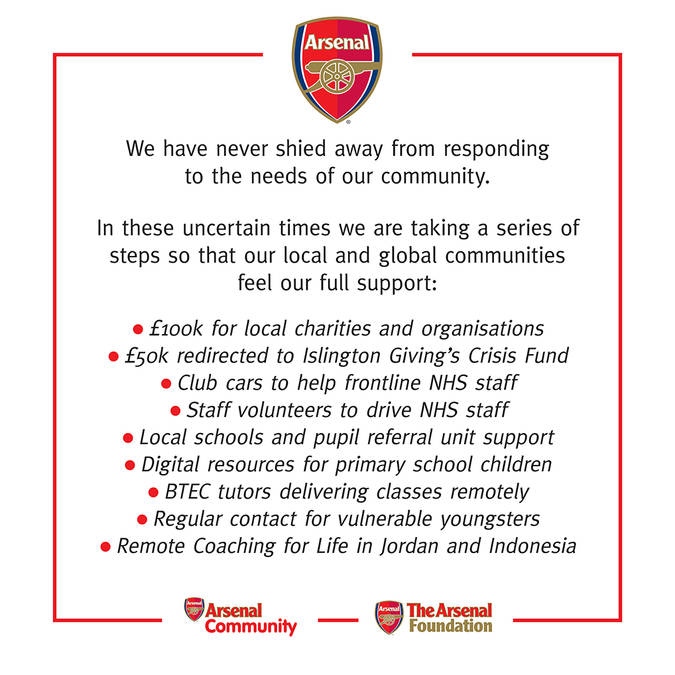 So, the Gunners have been doing their bit, and the response the mayor got back is everyone is willing to do what they can. The likes of Arsenal would have some of the best trained medical people who could work alongside NHS workers.

Even with the outside chance of football starting by the deadline reports stay clubs would be willing for academy medical staff to stay on helping at hospitals. Like the Premiere League’s statement says, even though there is no sport, the sport can still play its part.

It’s easy to look at only the negative at the moment but in a week when a Jack Grealish rightfully made the front page of papers for his reckless actions, it’s only right that we point out when football does good.

Some can’t win, they’re criticized for not slashing their wages yet when Ronaldo does it by 90 percent, he’s accused of it being a PR stunt.

Many times over the years I have worried we were losing our reputation for doing things ‘the Arsenal way’ but when it comes to things like this, we can still show some class.

Proud to be a Gooner…