Wenger should NOT regret the whole 22 years at Arsenal 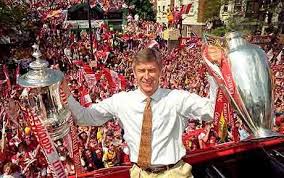 Much has been made of Arsene Wenger’s quote that he regrets staying at Arsenal for so long after he was asked by a reporter what his biggest mistake was: “Perhaps staying at the same club for 22 years.” Le Prof replied.

“I am someone who likes to move around a lot, but I also like a challenge. I’ve been a prisoner of my own challenge at times.”

But that doesn’t mean he regrets the whole of his time at Arsenal. Surely he should be immensely proud of his achievements in the first epoch at Highbury before we moved to the Emirates and the budgets were cut drastically. As Nigel Winterburn said: “He had a burning desire in his first period, from 1996 to 2006 – I can’t see any player or supporter not being in awe of what Arsene Wenger was doing,” he said.

“After that, when we moved to the new stadium, he had this obsession of trying to get Arsenal back to where he believed they should be and maybe he is talking about that period.

“In his own mind he felt he was still capable of producing the teams that would go on and bring titles back.

No matter how many Arsenal fans were certain that he had overstayed his welcome in the last few years, none of us can criticise the great things he did for the club in the first decade. Let’s look at the trophies won in that time…

After the move to the Emirates things went awry for a long time, but he still managed 3 FA cups, which is a lot more than many other clubs I could mention, but my point is that we should celebrate his first ten years, and we can regret (along with Wenger) that he didn’t move on when things started to go downhill….