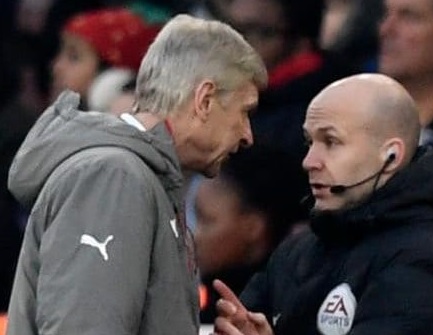 It was not exactly expected that Arsene Wenger would take his revolutionary mind to FIFA when he left Arsenal.

He had revolutionised Arsenal’s style of play when he became their manager in the 90s.

He spent two decades managing the Gunners and helped them remain a top club in England.

In his new job as FIFA’s Chief of Global Football Development, the Frenchman is now proposing even more revolutionary ideas.

He wants a World Cup every two years and now the Frenchman is proposing for referees to give post-match press conferences.

Referees are involved in a lot of controversial moments in matches and Wenger believes it would make sense if they are given the chance to explain some of their decisions after the matches.

He doesn’t know if the match officials would accept the idea and insist it would help to stop controversies before they become a public discussion.

“it would be a good way to avoid controversy and shut them down before they become a public debate”.

“We would have to get the support of referees, and I don’t know what kind of state of mind they’re in after games to be able to give an opinion.”