What is Wenger going to Do to Get Arsenal Back on Track? 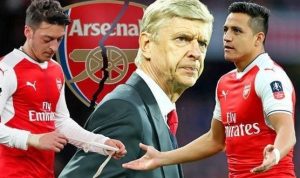 Whenever there’s a big soccer tournament like the Premier League taking place, there’s a lot of noise and confusion around the predictions made about the teams’ performance and scores. With so much distraction and gossip online, it’s understandable that many of us don’t know where to start from when we want to put our money on the line. Those who feel disoriented in the world of sports wagers, should look at the football betting over under guide before visiting an online bookmaker.

Of course, besides learning the basics of gambling, punters need to know about the latest events in the sport. For anybody else who still wonders what’s happening with the Gunners, one thing is clear right now. It’s no secret that Arsenal hasn’t been in such great shape at the start of the Premier League’s season and many have pointed to Arsène Wenger’s inability to discipline the team and negotiate better transfers. In fact, Arsenal’s most recent loss to Watford seems like a continuation of a five-year-old breakdown for the club. However, the true Arsenal fans firmly believe that the team will rise from the ashes like a phoenix. Nevertheless, there remains unspoken the question what will happen to the team in the long run if Wenger was to quit in few weeks’ time. Let’s have a look!

Is Arsène Wenger that bad?
According to Richard Williams from The Guardian, coach Wenger is the real malaise at the core of the team, as he was never seen to do anything to motivate the players to improve their performance. His argument is a valid one, as it points to the main problem for Arsenal – the lack of genuine leaders on the field of the rank of Vieira, Adams, Zidane or Ronaldo.

Wenger has received a lot of bad publicity over the past five years, and this is just another dog barking against the club. As we all know, not everything is in his hands when it comes to negotiating pricy transfers. There are other idle stakeholders such as Stan Kroneke and Ivan Gazidis who comfortably delegated the whole responsibility to Wenger to find this ‘catalyst for change’. On the other hand, the team itself manages to come afloat each and every time by getting to the Champions League and has won 3 out of 4 FA Cups, proving that there’s still hope for the Gunners when they feel pressured to mobilise. Maybe after the recent setbacks things will take a different turn and Arsenal will finally gather itself together for a final push to change its miserable fate, regardless of the sloppiness of the different behind-the-scenes actors pulling Wenger’s strings. As for Wenger, he is a hard nut to crack, but he’s proved his devotion to the team and is not to give up on it now.

The Alexis Sanchez Saga
I am sure many of you noticed the absence of Alexis Sanchez at the start of the Premier League, and it’s no secret that throughout the year he’s been on and off at his game due to various injuries. On top of this, the saga about his future plagued the performance of the whole team, as his peers saw him slowly giving up on Arsenal. He surely cares about the team, but he is also first to realise that with or without him, the club is never going to return to its golden years. Here another behind-the-scenes problem comes to the fore, as the club failed to buy Thomas Lemar from Monaco and had to keep Sanchez in at least until the end of the year. Buying him back is estimated at £140m worth of fees for the club – a sum that is impossible to justify, nor find. Apart from being short of money, the main problem for Arsenal remains the midfield and the lack of any instructions for the players to follow. If the next transfer window seems far away from Arsenal right now, so then the only thing the Gunners desperately need this season is new tactics and a reshuffle of the roles on the field. Certainly, the three at the back formation at the match against Stoke, Liverpool and Watford didn’t do them any good, so what is left for Wenger is to take a step back and think carefully of how best to reconfigure the team. At least, he’ll show initiative contrary to what the tabloids have him portrayed as. Then, maybe the players will find a new source of motivation.

Wenger’s Secret Weapons – the Transfer Windows
This summer’s transfer window can be taken as almost a complete failure on the part of the management, as it seems that the club is always too late and too skint to allow itself a better deal. The good news is that Mesut Ozil remains in the team due to lack of any other offers and Alexandre Lacazette and Sead Kolasinac are the new additions just in time for the Premier League’s season. Kolasinac has quickly become a Wenger favourite, but it’s certainly not good timing for his morale to start at the losing end of Arsenal. However, Kolasinac is truly Wenger’s secret weapon and probably only hope for more offensive, consistent and energetic game that the team hasn’t pulled out in a long while.

As for Lacazette, he missed his chance to shine by missing an open goal at the very start of the tournament. With the contracts of Mesut Özil and Jack Wilshere expiring in less than a year, Sanchez being too expensive to afford to keep, surprisingly Wenger hasn’t given up yet. At the end of the transfer window in a last desperate move the club revisited the Thomas Lemar offer, this time offering the record deal of £92m (£40m more than what was on offer in August) for him to join the Gunners, but alas to no avail, as Lemar turned down the offer. Monaco surely did Arsenal a favour saving them a lot of money. Nevertheless, However, Wenger’s naïve belief that the transfer market will change entirely in the next year, with fees becoming more regulated is disheartening, as having been said in the midst of Arsenal’s crisis, it is just a show of weakness on the part of the chief.

So, what is left for Arsenal’s most devoted fans to look for when even the most experienced Premier League bettors are surely stunned by this evolving mess? Nobody can really predict what will trigger Arsenal to wake up, but at least for those who have some remaining trust in the odds, check TopRatedbettingSites.co.uk for more of the best live betting odds.