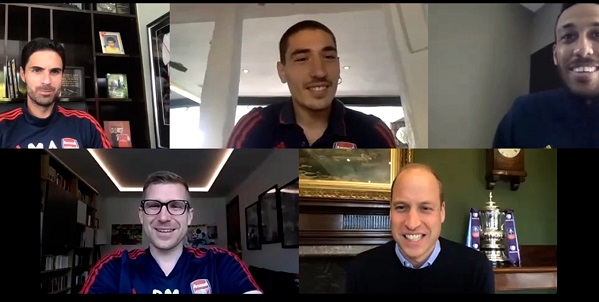 What Prince Williams said to Pierre-Emerick Aubameyang about potential transfer

Arsenal is fighting to keep hold of Pierre-Emerick Aubameyang beyond his current contract and it seems the harder they try, the more other teams want to get him.

The latest individual who is trying to persuade him to leave Arsenal is Prince Williams who is a renowned Aston Villa fan.

Having gotten the opportunity to speak to Aubameyang, he couldn’t resist the urge to ask Aubameyang to join his beloved Aston Villa.

He told the Gunners’ captain, as quoted by the Mail: ‘Pierre, I’m hoping you’ll be at Aston Villa,’

The Arsenal entourage on the call did laugh it off and he added: ‘We’ll have to a word later.’

It was obviously a joke but it sends a message about how highly thought of Aubameyang is among the fans of other Premier League teams.

The Gabon star is one of the most lethal strikers in the world and losing him could see the Gunners struggle for goals.

The club is reportedly focused on keeping him beyond his current term and they have prioritised signing him (The Metro) on to a new deal over making new transfers in the summer.